As it became obvious that this wouldn't be a short stint of us all at home, we decided that Ryan definitely needed a better work setup. I need one as well, but we just don't have the space; since I need to be able to keep patient appointments/discussions about patients private, working up in our bedroom really is the only option and there isn't room for a desk and good chair up there. So folding chair at the side of the bed it is. I pulled in my sister to help with ideas on how to rearrange our space to create an "office" for him. Had to map out our outlets as well, since his laptop requires a 3-pronged outlet, which helped remind us that we need some electrical work done at some point. 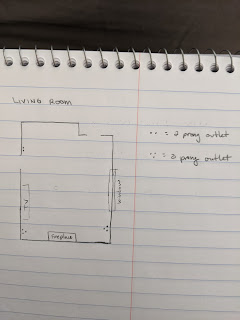 Our couch lives in front of the window. I never would've thought to get Ryan a desk in the corner between the couch and the fireplace, but she suggested it and it's brilliant! We weren't able to find a cheap corner desk that would fit (actually, there was one on Ikea, but they were stupid with their ordering system and you couldn't order it despite it saying it was in stock. But you only found that out after you were halfway through the order process.). We found a cheap desk that we'll give away after this is done. He gets to enjoy having sunlight and looking out the windows while he works now! 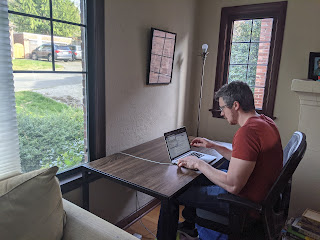 We did the usual outdoor egg hunt on Easter. As usual, the kids missed many of the most obvious eggs. They tend to wander around, swiveling their heads to and fro, but not actually looking. It becomes clear why I'm apparently the only person in the house who can actually find anything. 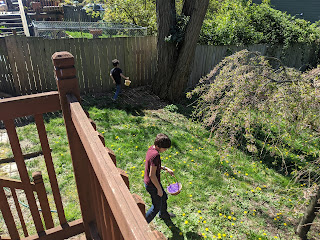 Speaking of finding things, as all of this started, Ryan lost one of his jackets. We both looked everywhere. I wondered if he'd left it at his drum lesson or at the restaurant we'd been to recently. No luck at the drum school and we were both positive he'd put it on before leaving the restaurant. He was very sad about it. We were watching a show a few days later and one of the characters had their blue bomber jacket stolen - Ryan sympathized with the character deeply. This past weekend I got in the basement closet to pull out my sewing supplies for masks, pushed aside some clothes hanging there, only to realize I'd just moved the jacket out of my way! 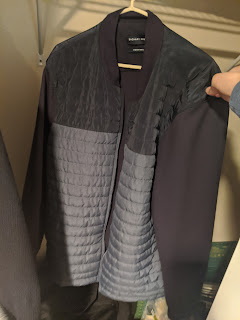 He must've washed it, hung it there to dry, then forgot it was there. I had a good laugh about that one. And we just saved ourselves a few hundred bucks, because I was very ready to have him just go buy a new one once the stores opened again. Yay! 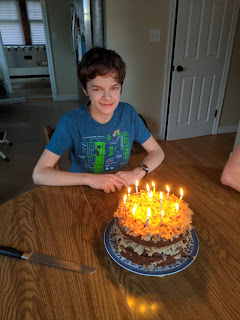 Lighting the candles on this cake went much better than lighting them on the pie, for the record. He was excited to get lots of books and some video games he'd been eagerly waiting for.

Ryan made time to get in the first mow of the season, and almost mowed over some bunnies in the process! Thankfully they ran away in time. Of course, we won't be so thankful if we try to plant anything we care about and they eat it. Neighborhood has been having a huge rabbit boom lately. But we've also seen coyotes around (though not right near our house yet), so maybe it'll all balance out? 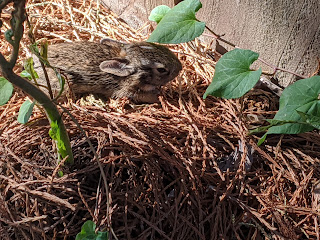 And I finally finished a mask! My sewing is definitely rusty. Huge thanks to my mom for her tips and guidance. I don't visualize things well, which causes issues with sewing sometimes and she is remarkably patient putting up with it. Now I just need to make a LOT more so we have plenty for all of us. 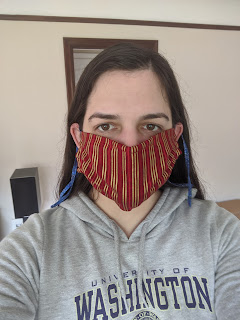 I've agreed to take on an interim position at work as a biochemical genetics dietitian. These RDs work with patients who have inborn errors of metabolism - where there are genetic errors that make it so they can't metabolize certain proteins or fats or where they are unable to break glycogen down to make glucose. You know the newborn screening they do? Some of these inborn errors are screened for on that, because the consequences of not diagnosing these conditions early are severe. Nutrition is key to managing them and the RDs take turns being on call 24/7. It should be a fun challenge to undertake. I'm training intermittently through the next few weeks, and will start covering in mid-June.

Our stay at home order has been extended until the end of May at least. Summer camp for the kids is up in the air, which is disappointing all around, but obviously we prefer everyone stay safe and healthy!
Posted by Erin at 4:32 PM

Good job on the masks! I have been sewing those, too. Can't believe Gareth is a teenager! What?!!!