One nice perk to quarantine is that our weekend days are suddenly very empty. Not that we don't enjoy the things we usually do with them, but now we're having the opportunity to do some things we enjoy doing that maybe wouldn't have been prioritized previously. Among those a couple weekends ago was a cheesecake trial run. Ryan has done German chocolate cake for his birthday for several years, though we've also occasionally purchased a cheesecake. We've never made one before, and he was thinking he'd like that this year, so decided to try it out.

Our local baking supply shop (just a couple blocks away from us!) is taking phone/email orders and then no-contact pickup and delivery. We didn't own a cheesecake pan, so I placed an order and was able to walk with Mal to pick it up that afternoon. Love our local stores!

Everyone pitched in with measuring/mixing/grating of lemon zest. Ryan took charge of spreading the base across the bottom of the pan, though I helped get it up the sides a bit.

The recipe we used called for a biscuit crust. I was a little worried when it puffed up a fair bit in the oven, despite our having pricked it with a fork. 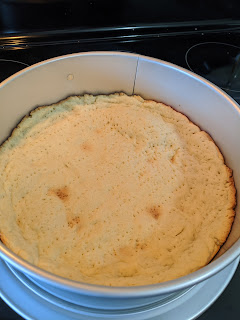 But it seemed to be okay when we poured the filling over it, so into the oven it went. Apparently the key to not having a big crack across the top is to cook it until it's just set about 1 inch in from the edge, then turn off the oven, leave the oven door open a bit, and leave the cheesecake there for another hour. It sets the rest of the way as the oven is cooling. 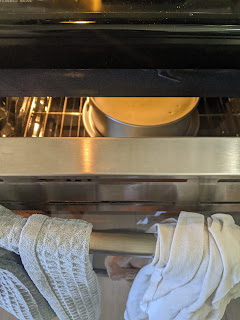 I had no idea if it would really work or not, but it came out looking quite good - no crack and set all the way through! 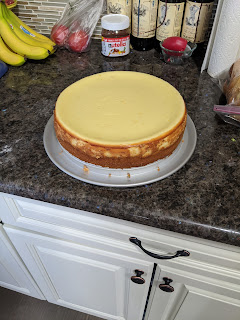 I was making a store run that day anyway, so picked up some frozen tart cherries to make a fruit glaze with. 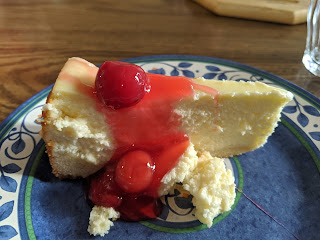 It turned out way better than I expected, very creamy, with the fresh lemon zest definitely coming through. The base was a little thick at the edge, so next time we know to leave a little more in the center! Gareth wanted us to finish this one off by the next weekend so we could make another, but I think if we did that we'd be tired of cheesecake before Ryan's birthday rolled around!

We got a new raised bed the other day, intended for patios/decks. I was able to pick up some seeds at the grocery store this past week. I wanted to keep it on the deck since last year we put some tomatoes down in the yard and they were woefully neglected since we just didn't make it down to them that often. Hoping that on the deck it will be more visible to us and we might actually remember to tend to whatever manages to grow. Not sure how it will fare against the bunnies though (not sure they can get up to the deck, so maybe another pro to putting it up here?). I also got a planter to go on the deck railing that I'm hoping to grow some herbs in. I've been wanting to do that for a while and am excited to finally get around to it - if it goes well then I'll expand next year. I know we should've been planting ages ago, but Seattle's a little forgiving in that respect since it can take a while to get warm here. Better late than never, I figure. Even if we don't get much to eat from it, it'll be something else for the kids to do. 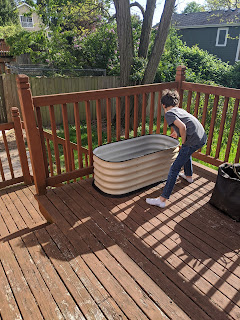 We're starting to do more Zoom visits for work, and after having a few in one day I realized my side-of-bed work setup just wasn't sustainable for the long-term while doing video calls. So we kicked the boys out of their fort and I took over the music room as my office. I made our first trip to Costco in a long while and was able to use my work badge for priority entry into the store. Picked up a folding table for a desk. My back is appreciating my new setup, though a certain 8 year old has decided that me being on the same floor as them means they should be able to knock on the door and ask me questions all day long. 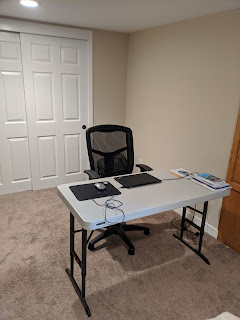 Ryan's finally given in and started watching Great British Bake Off (I was doing a re-watch). So while I've watched all of them available on Netflix, he's new to it and it's been a ton of fun to watch all together. We're making notes of bakes we'd like to try and hoping to gradually work through them over the next many weeks/months.
Posted by Erin at 5:14 PM

We totally made cheesecake for the first time, too! The weird things this quarantine is bringing out in us, huh? I made ours in our instant pot so it was really easy, but also very small. But it tasted great! (My recipe was from the food blog Damn Delicious, if you want to find it!)

Your office area looks fantastic-- good luck keeping the kids from bugging you!