After I graduated a couple years ago, my mom and I made a pane bianco. I'd been meaning to make it again and just hadn't found the time. Newly inspired by GBBO, Ryan decided we should do that this past weekend. It's been a ton of fun to work together as a family on these bakes. We ended up making two loaves, one per day, because we had the basil and may as well use it all up, right?

It's quite an elegant loaf, but I felt it was a little dull looking. Decided an egg wash would be worth trying the next time we made it.

Day 2, I did mostly by myself. I was more confident with cutting the bread and letting it open up more. But also forgot about the dough while it was proving initially, so may have been a little over-proved. I wouldn't really know how to tell. We opted for a whole egg + milk wash and I loved how it gave a nice shine: 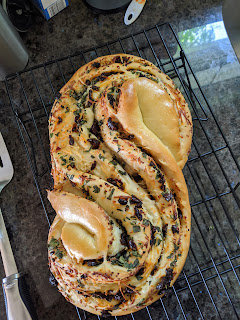 For Memorial Day, we had some rhubarb and so I needed a recipe to use that up. When I traveled to the UK in college, we were frequently served rhubarb crumble with warm custard and it was pretty much the best thing ever. No one was able to give me a recipe ("It's just from a packet!"), so I haven't had it in years. I was able to find a recipe and made that up. None of my family were huge fans of the raw rhubarb (Gareth didn't seem to mind it much, but he likes to eat raw cranberries too...), but everyone loved the rhubarb crumble and the custard. 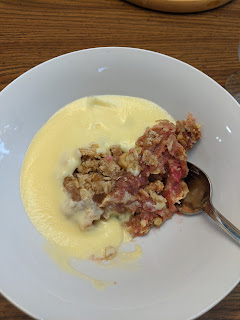 Gareth has been making dinner for us once a week, which he seemed hesitant about at first, but now seems to be enjoying. It's great to see his confidence grow - when we last did this ~3 years ago, he needed help with every step. Now we can pretty much leave him to his own devices and he'll figure things out, but knows we're available to help when needed. So far he's done smoked gouda mac n cheese, scrambled eggs and biscuits, and a "southwest falafel" with avocado (basically pinto bean patties that you serve in pita with guacamole).

This next weekend we'll be making a chocolate cheesecake for Ryan's birthday. And, if time permits, may make up the Julia Child leek quiche for his birthday dinner (we've done it dozens of times before, but it's been years since we last made it). Macarons are also planned for this week since we have a bunch of egg whites leftover from making the custard.
Posted by Erin at 9:27 AM

Those all look so good! I am sure they were very tasty, too!