I missed 9 months, but I'll include his stats here. Malcolm's on the small side (no surprise there!), which was really made clear when we went to dinner with some friends. Their 4 month old was as big as Malcolm, a little bigger even. But considering he started out life 3 lbs. larger than Malcolm, I guess that isn't too surprising. At his 9 month visit Malcolm was 27.5 inches long (25%), 16.14 lbs (10%) and had a head circumference of 45.25 (55%). I love that our doctor doesn't focus on the percentiles, but just on whether he's growing or not. 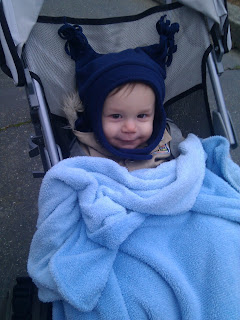 Malcolm's learned how to drink from his sippy cup, though tilting it very far up is not figured out yet, so the water level has to remain above a certain point or he gets frustrated. He's definitely a crawler, but a belly crawler. So he does the whole crawling motion, but keeps his belly on the ground. He was starting to pull himself up into a kneeling position, but he was using the tv stand to do so. This meant that after his knees slipped on the floors and he whacked his head against the stand a couple of times he decided pulling up on things was a bad idea and hasn't been too keen to continue practicing that skill. I'm interested to see how long it takes for him to try again and to start pulling up to standing. Gareth was starting to do that around this time, but our apartment in VA had low window sills that were perfect for that and our couch at the time was much lower as well. I look around our house here and don't see a lot that Malcolm will be able to pull up on.

Teeth numbers 5 and 6 made an appearance a couple of weeks ago, after putting us all through much grumpiness. Sleeping at night is still a work in progress. I've stopped nursing him at night, but he still wakes up at least once each night. We let him cry for a while and then go tuck him back in. Often he's able to fall asleep after us going in just once, but occasionally he continues crying or else wakes up several more times through the night. He seems to be a much lighter sleeper than Gareth was (and is).

He's really into finger foods these days, and usually gets a bit upset if you're only feeding him with the spoon and not giving him something to feed himself. He's been enjoying getting to eat the foods we eat and particularly loved some spinach and cheese spanakopita we had at a friends house the other day. 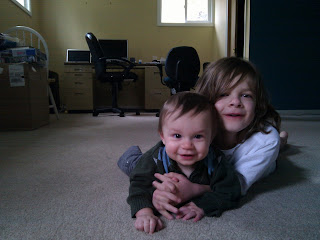 Malcolm loves playing with Gareth and continues to be fascinated and amused by everything Gareth does. When they're supposed to be going to sleep, he likes to sit in his crib and jabber while Gareth reads aloud each night. He likes playing peek-a-boo and if he's being grumpy you can usually make him momentarily happy by singing pat-a-cake, eensy-weensy spider, or wheels on the bus with him. His separation anxiety is quite strong these days, though he did show some improvement when we left him with a sitter last weekend. He still cried most of the time we were gone, but did calm down for dinner and a half hour before bedtime and was sound asleep when we got home. Considering that the last time we left him with a sitter he cried the entire time we were gone (and was still crying in his crib when we returned at midnight), having at least a few minutes of calm is major improvement.

While we're often annoyed with Malcolm when he cries during the night, we all enjoy having him around when we're more awake. It's astonishing to me that an entire year has almost passed. Ryan and I were dreading these first several months and now they're behind us, seemingly so much more easily than they were the first time around.
Posted by Erin at 2:34 PM

Wow...time flies! (whether you are having fun or not!)

Your boys are both so cute, and getting too old too fast!

Malcolm's smile is so bright. It's no wonder you can't resist him when he's awake (though I will admit with you that those night-time screaming sessions make you forget about those bright, happy smiles).

What good boys you've got! Looks like you're doing a great job!

Ooooooh, what a cutie! He looks a lot like baby Ryan in that first picture. Thanks for the update!