I had good intentions to set up several play dates for Gareth over the break and then completely failed to follow through on those intentions. We did get one in, though - a trip to the Pacific Science Center with some friends. Going to the science center is not something particularly adventurous since we have a membership and therefore try to go at least three or four times during the year. But, it'd been a while and they have a new exhibit about your body and health, so it was fun to go again.

We didn't get to spend as much time as I would've liked in the new exhibit, but Gareth enjoyed smelling various types of breath (minty, garlicy, your run-of-the-mill morning breath, etc) as well as some more pleasant odors such as cloves, watermelon, cinnamon. He also got to sit in front of a computer, have it take his picture and watch it age him in a couple ways - one as though he takes good care of his skin/body, and the other showing what he'll look like if he has too much UV exposure. It looked rather funny since I don't think the program is intended to work for five year olds, so some parts of his face, like his eyes, looked super-young still. But it was modeled so the skin looked all wrinkly/saggy. I don't think we came even close to exploring the whole exhibit, so we'll have to go back soon to check it out in more depth.

Other fun things included Malcolm actually showing some interest in playing in the toddler area: 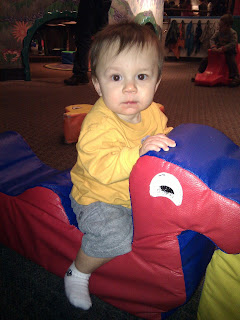 Okay, so he looks totally unimpressed in this picture, but I assure you he was loving this thing. This was the only picture I managed on my phone that wasn't mostly blurry. His other favorite in the play area was the rubber matting on the floor, which, based on his determination to return to it whenever I pulled him away, was quite nice to chew on.

After we finished up at the science center, we went over to the Center House and got some pie. But before we could get there, Gareth and his friends found this fun structure to play in: 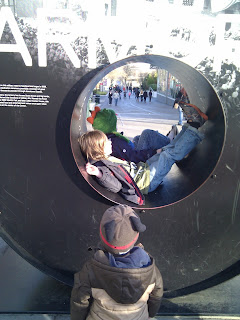 It's a lot harder to go out and do things with Gareth in school and Malcolm not old enough to enjoy many outings yet, so I was glad we took advantage of the break to get out at least a little bit.
Posted by Erin at 3:07 PM

This is so funny to read, because I went to the science center so many times as a kid (although an older kid-- like in middle school and high school, and even in college with visiting boyfriends!), but I've never brought my own kids there! I bet that's a completely different experience! Especially when you mentioned getting food at the center house-- I sang with a choir that performed there a couple times. What memories! Promise me you'll go to the next Bite of Seattle, whenever that happens!

I'll have to see when the next one is. I have vague memories of seeing stuff about that last year at some point.

This post kind of made me laugh, Erin! The comment about smelling different kinds of breath was funny--that's something I kind of try to avoid doing, and there, apparently you can do it on purpose! Also, the thought of Malcolm chewing on the floor mat made me smile. The things they find....