We had a good Christmas this year. Christmas Eve is when we usually have our big dinner, but I forgot to put the ham in the fridge to thaw on Saturday, so we had to save the big dinner for Christmas Day. We had chicken bisque instead, which is delicious and was enjoyed by all. After we got Malcolm to bed the rest of us settled in to watch George C. Scott's "A Christmas Carol", which took much longer than it should have because Ryan wasn't happy with the picture and was trying to figure out how to get it to show properly on the TV so we'd get the whole picture with nothing smushed or stretched (he never found anything that worked), so it was quite late before Gareth was in bed.

I'd anticipated much crying from Malcolm through Christmas Day, but he ended up napping through most of it (though he was pretty grumpy/whiny for the time he was awake), so the rest of us were able to enjoy our Christmas in peace. I'm sure Malcolm will be a more pleasant Christmas companion next year.

Gareth woke up about 7:45, just after I got up. Since he was up, I let him play video games downstairs in order to distract him from his excitement and temptation to peek into the living room while I got ready for the day and couldn't supervise him. 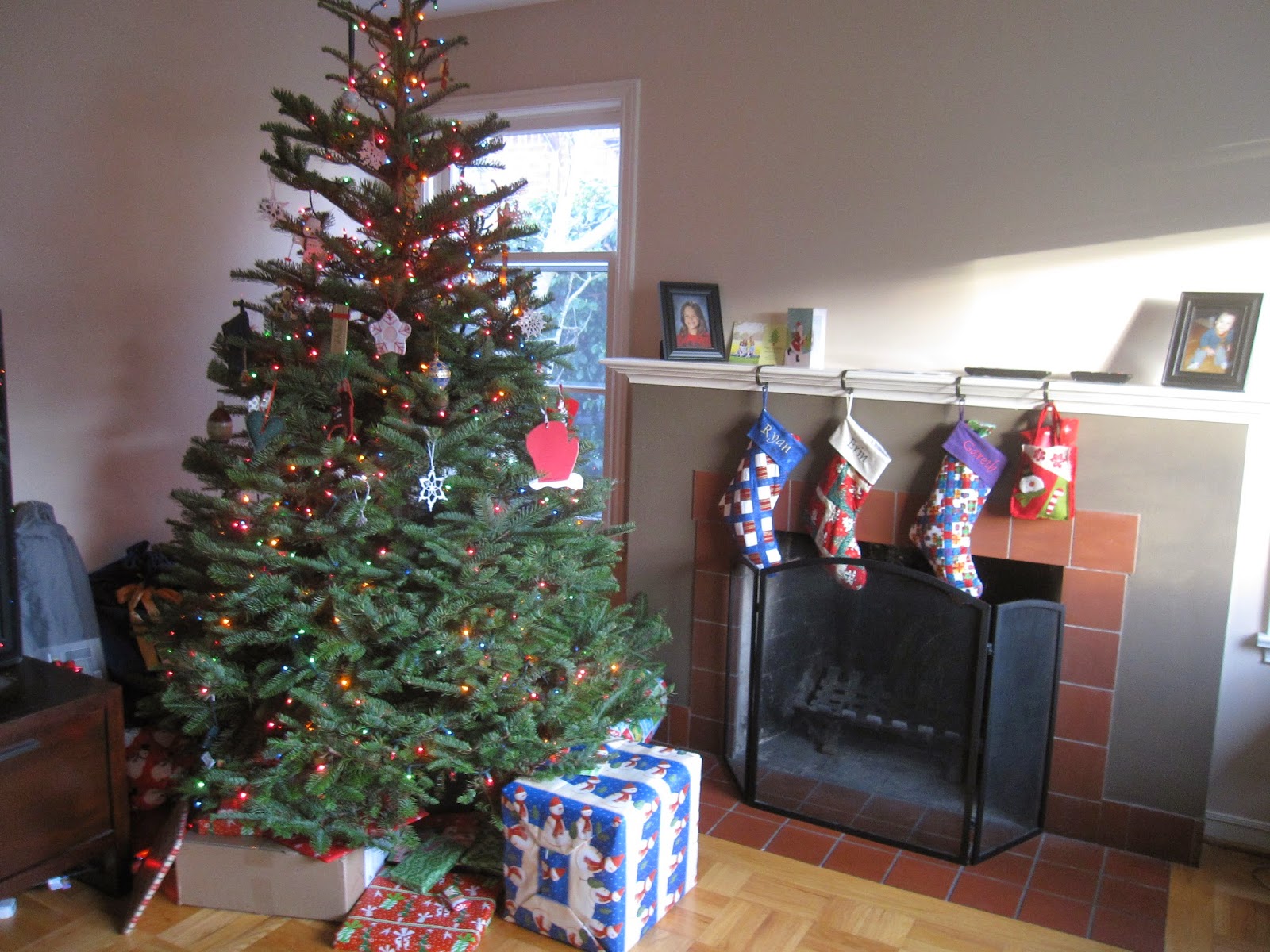 After doing that I got breakfast in the oven then got Malcolm dressed while Ryan showered. The boys and I hung out in our room until Ryan was ready. It was about 9:30 before we headed out to the tree. Malcolm was rather nonplussed by it all. He happily sat on the couch for a bit while stockings were opened. He was excited to have a clementine in his and, being way past normal breakfast-time, asked to eat it. Gareth found a monster popper in his stocking, which was a big hit. Ryan and Malcolm each had one as well, and it has been one of Malcolm's favorite things. He really likes carrying around the eyeballs and will happily chase them down if someone else will shoot them out of his monster for him. Gareth also received his long-desired pedometer. 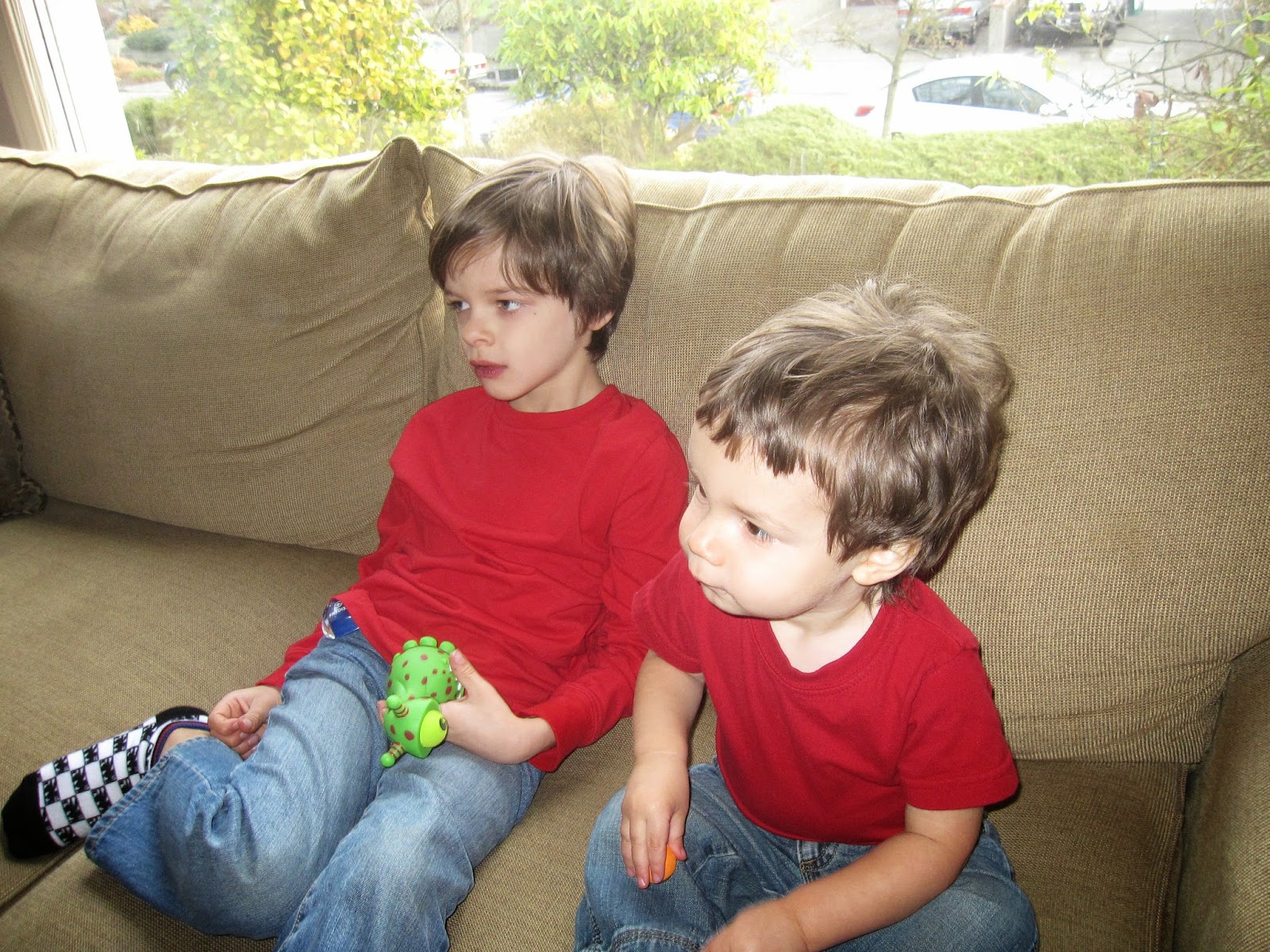 After stockings we ate breakfast (grapefruit, blueberry breakfast bake, and bacon), then headed back for the presents under the tree. Malcolm lost it shortly thereafter and so he went down for a nap a bit early while the rest of us opened gifts. Ryan's big gift this year was a Kindle. He'll be getting through books much more quickly now that he'll easily be able to read on his commute. Mine was a Wusthof Classic Ikon chef's knife. I already have good knives, but have decided that having two chef's knives would be useful. We also got the last of our big camping needs (sleeping bags and pads for Ryan and myself - these would've been purchased anyway, but I got them in mid-December and figured it'd be fun to stick them under the tree). 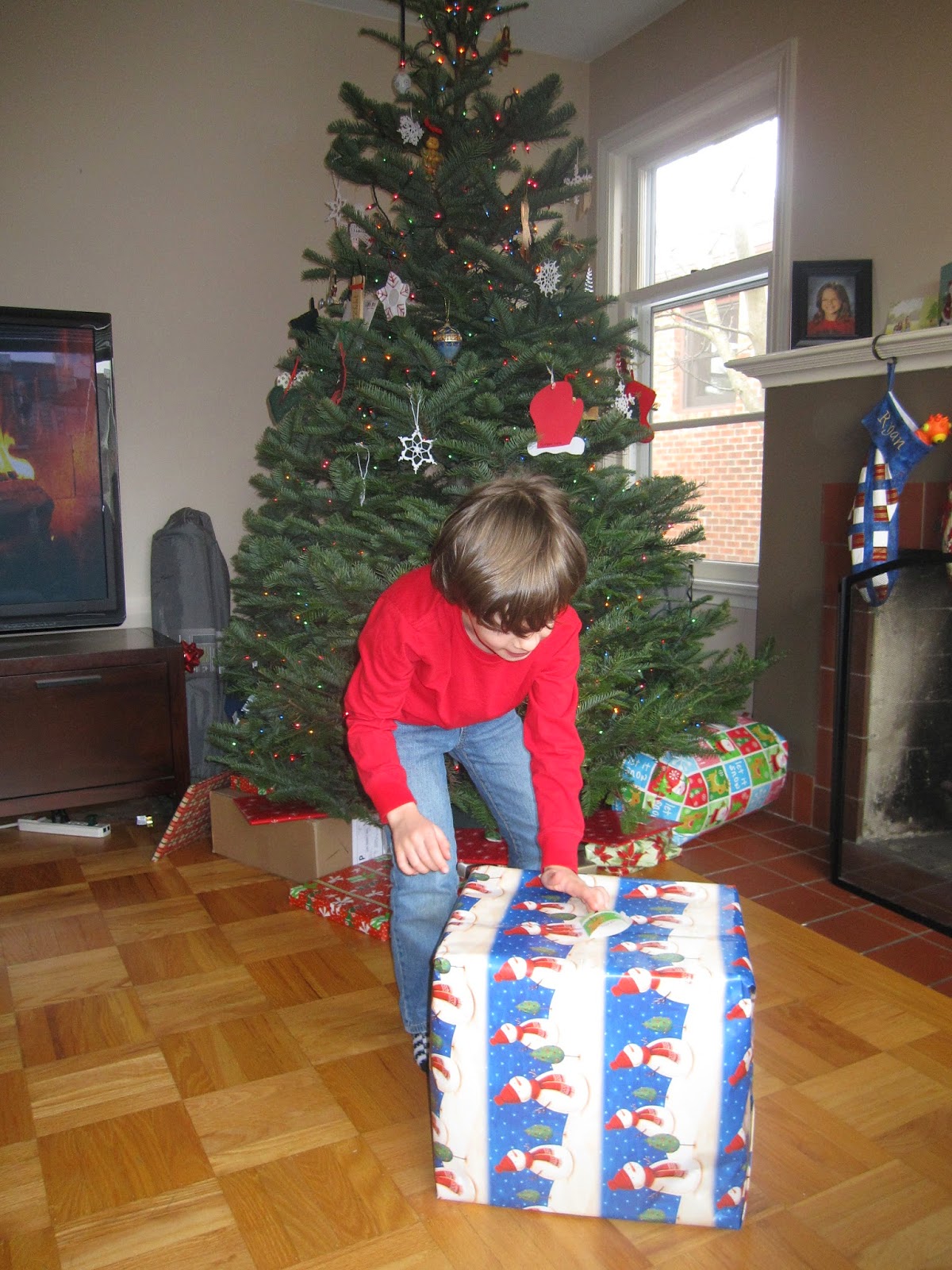 Gareth got a lego storage crate and a lego set that he'd wanted, as well as an Optimus Prime transformer and some board games (I was so, so tired of Candyland, so hooray for Clue!), a yo-yo, and books. 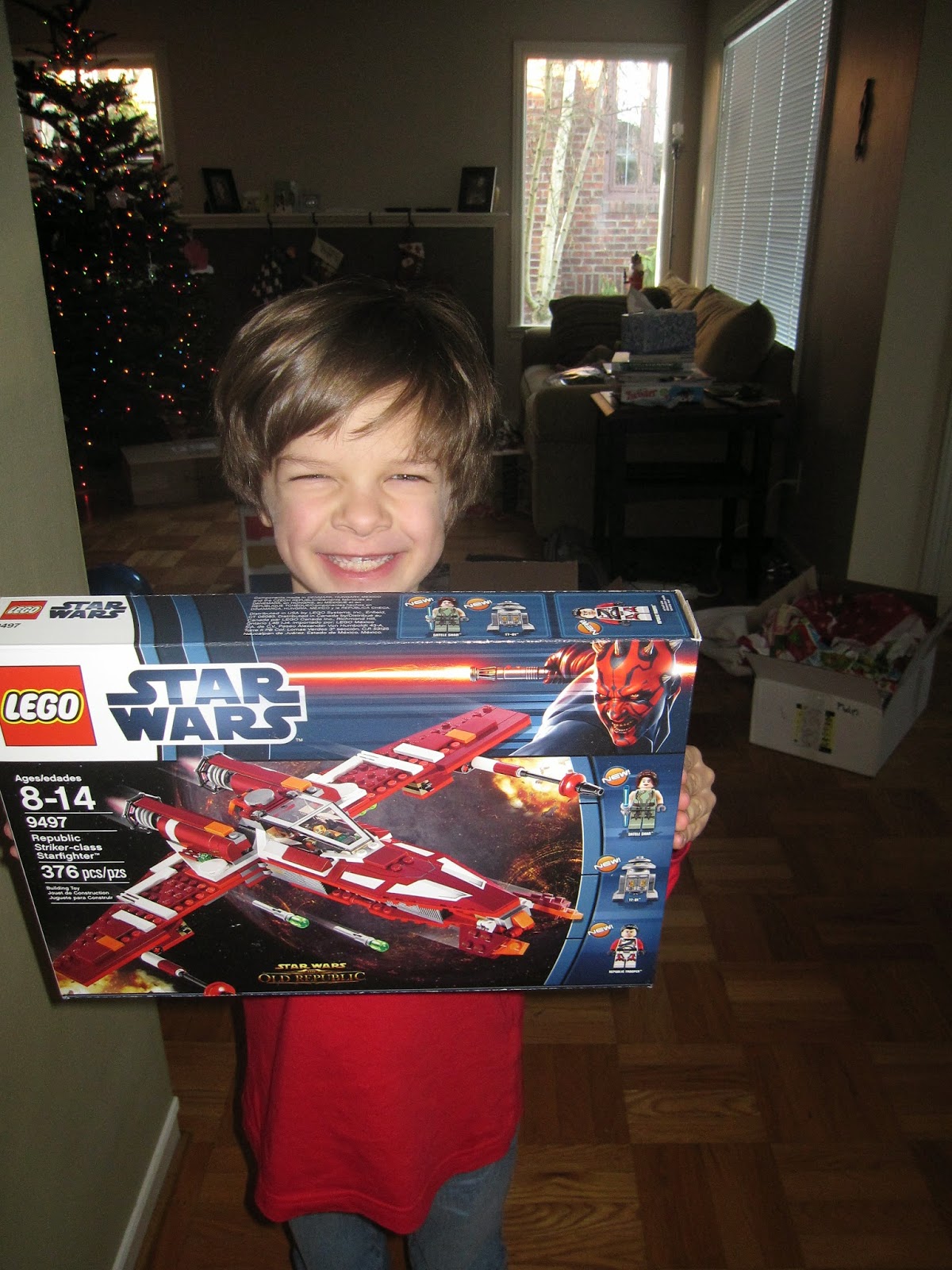 Malcolm didn't need much, so we just got him a few cars. He also got some books, some duplos, and a camping chair from other family members. 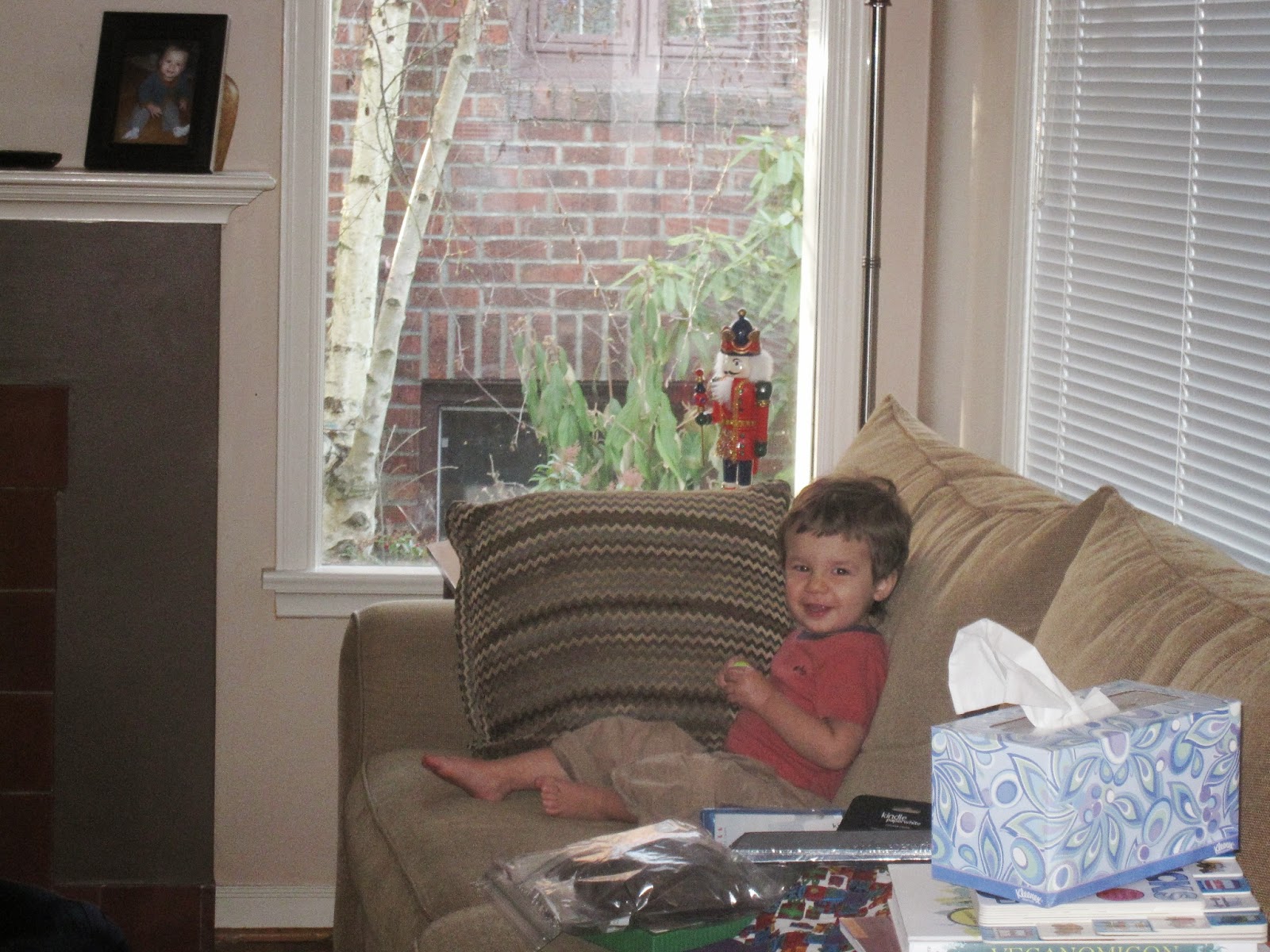 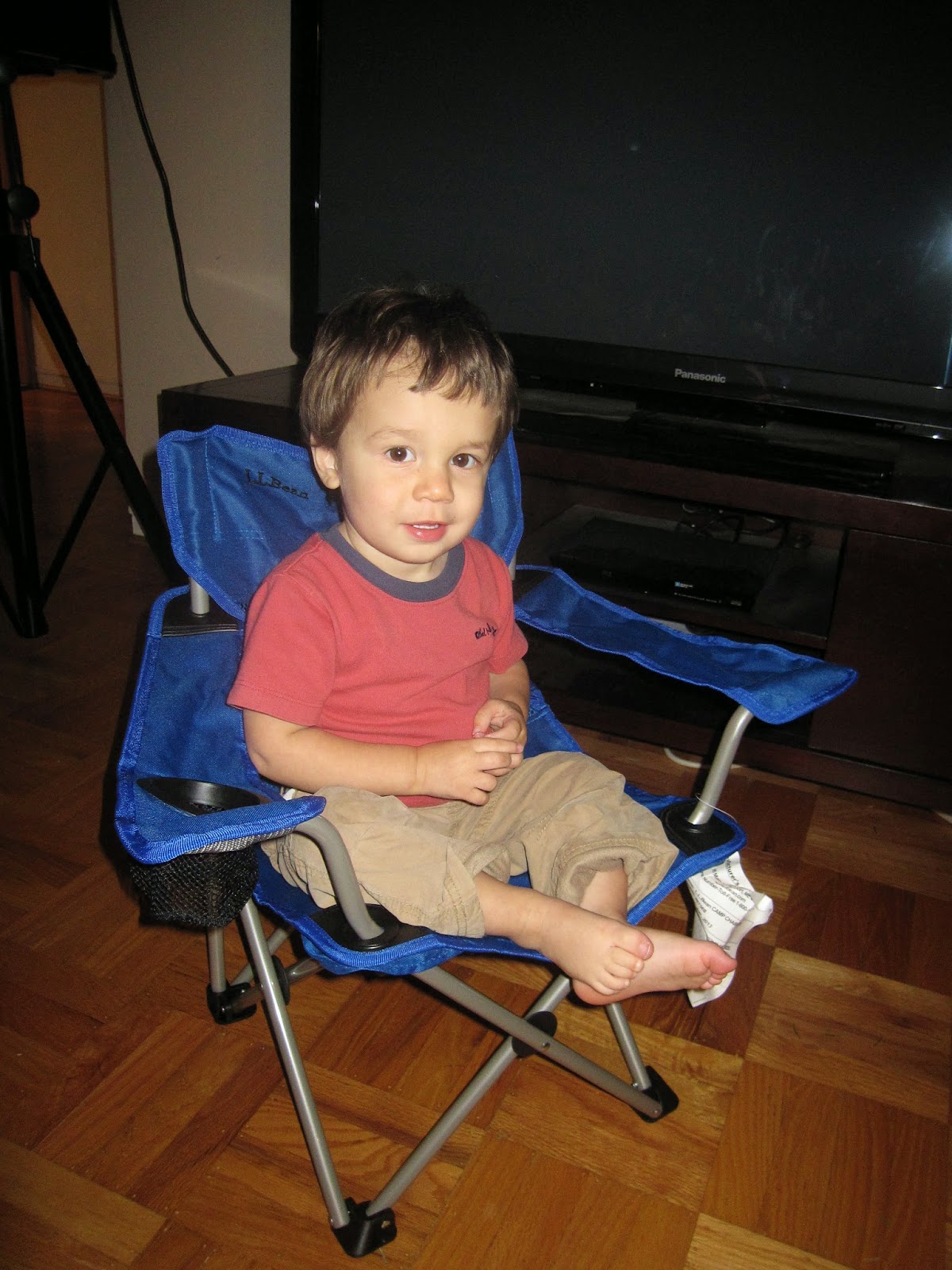 A family membership to the Burke Museum will provide us with some fun outings throughout the year.  By early afternoon we'd finished, except for Malcolm's gifts. The rest of the afternoon was spent relaxing and watching Elf while the ham cooked. We enjoyed our Christmas dinner (well, most of us did; Malcolm disliked it as much as he did Thanksgiving, despite it being all things he usually likes), then spent more time with new toys before chatting with Ryan's family and heading to bed.
Posted by Erin at 2:55 PM