We've spent the past ten days enjoying a visit from my mom, or as the kids call her, Gram. Our house (and our family) has been grateful for how clean she's helped us keep it (sweeping every day! dishes done after every meal! laundry folded! toys picked up!). Not that we don't try, but somehow between kids and school and work and music some of those items are rare occurrences. The kids have been thrilled because you can always use more adult attention. Gareth's been thrilled to get obscene amounts of video game time, playing on Gram's tablet at every opportunity. When we insisted he not do video games he usually opted for her Kindle, reading through another Diary of a Wimpy Kid and the first of the Oz books as well as part of the second.

Unfortunately, I'm not much of a picture-taker, so we didn't take many pictures. But we did fit in many fun things. We went to Pike's Place Market and bought way more than we intended, making the trip back with the kids and a stroller and all our items on a crowded bus rather entertaining (after the fact - more embarrassing/difficult in the moment).

We went to Theo Chocolate and sampled/bought treats, including chocolate covered marshmallows. That prompted my mom to make homemade marshmallows. The coconut covered were the best, chocolate was good, and powdered sugar was just way too sweet. 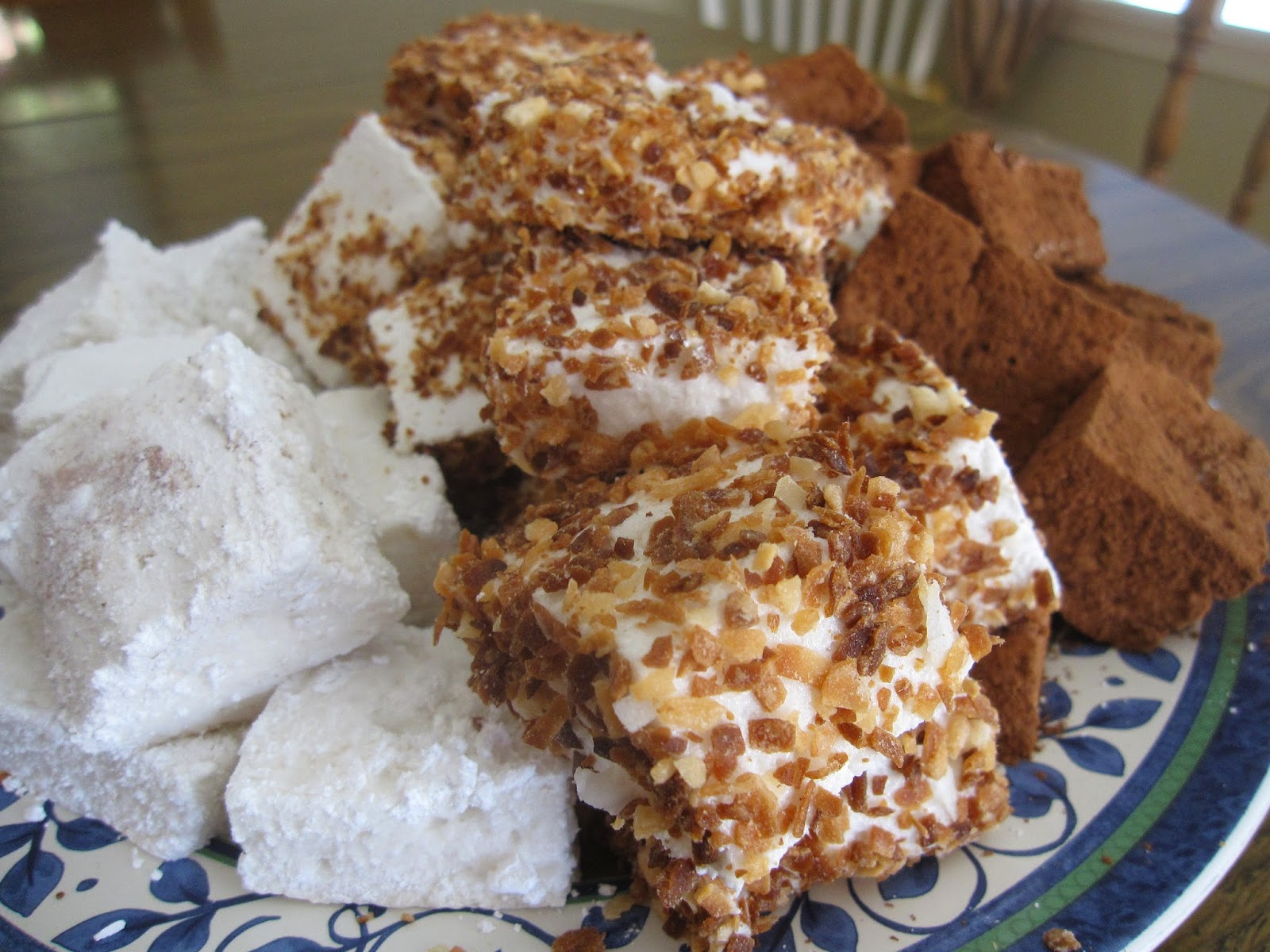 We took a trip to the science center with some friends of ours, allowing us to use our guest passes that we almost never use. 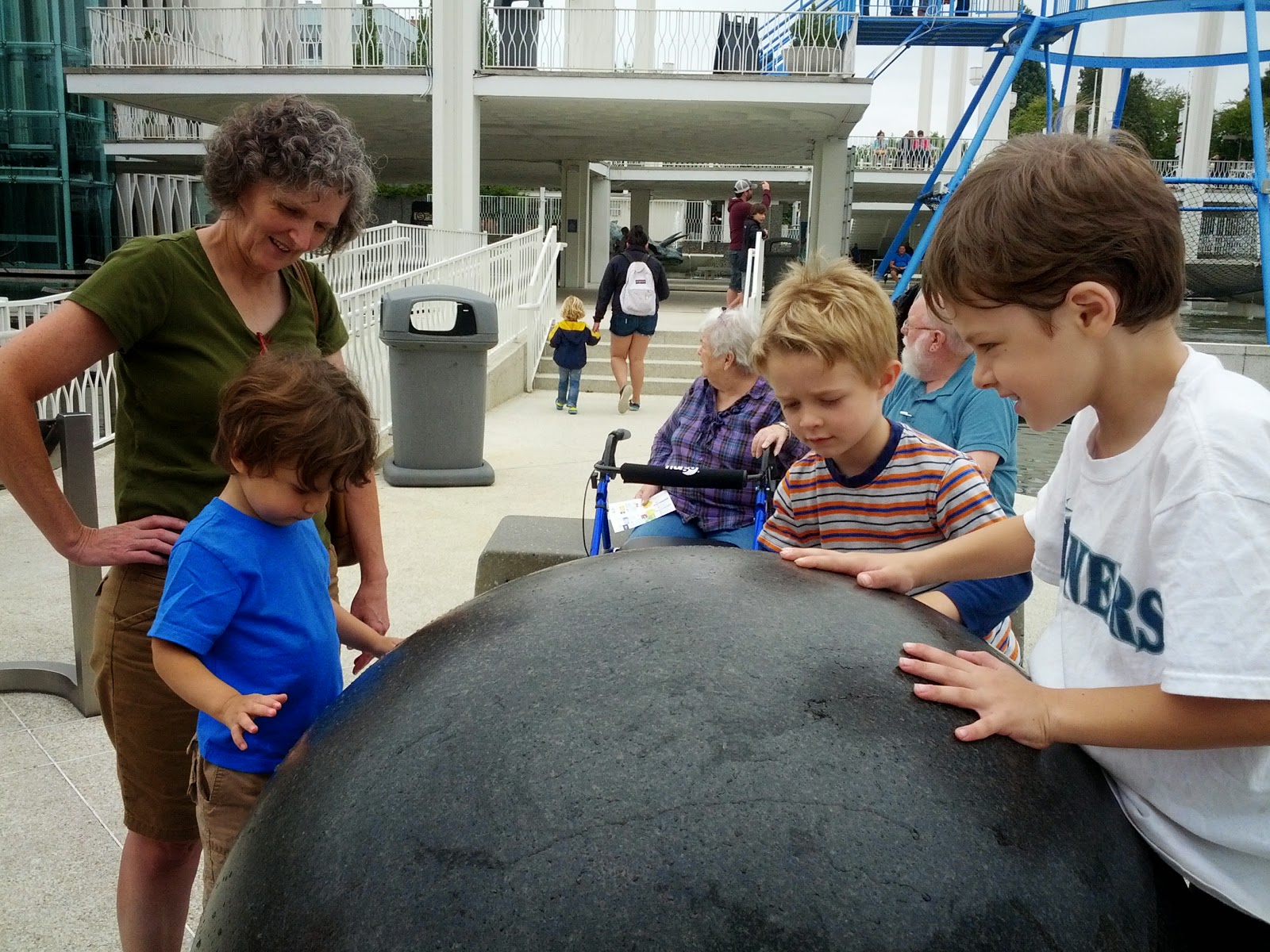 Gram convinced and helped me to hang pictures. She bought a couple prints for us at the market to go in the kitchen. We still have tons of wall space to fill (we have lots of big, empty walls here) and we need to get some updated family photos done (we don't have any with Malcolm - they're expensive around here!), but it makes a difference to have at least a few things up.


She also helped me pick out a duvet cover for our old comforter which, while still totally functional, was getting really boring and faded as well as not so nice looking after our stay in mildewy Indiana (no amount of cleaning can eliminate the rusty looking stains living in that home caused). I was really drawn to bold, dark colors, but the paint in our room is a dark green. The room is pretty small and I wasn't willing to spend a fortune on a duvet cover. Most of the ones we found in my price range had too much dark color, not enough white to balance it. Even with the white it may not have worked well with the dark walls. So instead I opted for a lighter cover and we got some accent pillows to provide the pop of color I was wanting. Though, of course, as soon as we started looking at pillows I was laughing internally the whole time, knowing Ryan would bring up this rant as soon as I came home. (He did!) And, in all honesty, I have to agree with the rant. The overpriced pillows will serve no purpose. They will spend most of their time off of the bed in all likelihood. We might lie back on them occasionally when the bed is made, but probably not all that often. But I couldn't think how else to get the bright colors I was wanting without making our room seem ridiculously tiny. And they look really good with the duvet.

The boys helped my mom pick apples from our tree, which we turned into an apple-blueberry crisp (the apples are usually too tart for adults to eat plain, though the boys love them). We went to a friend's birthday party where the boys got to bring home superhero capes/masks. Here's a blurry SuperMal: 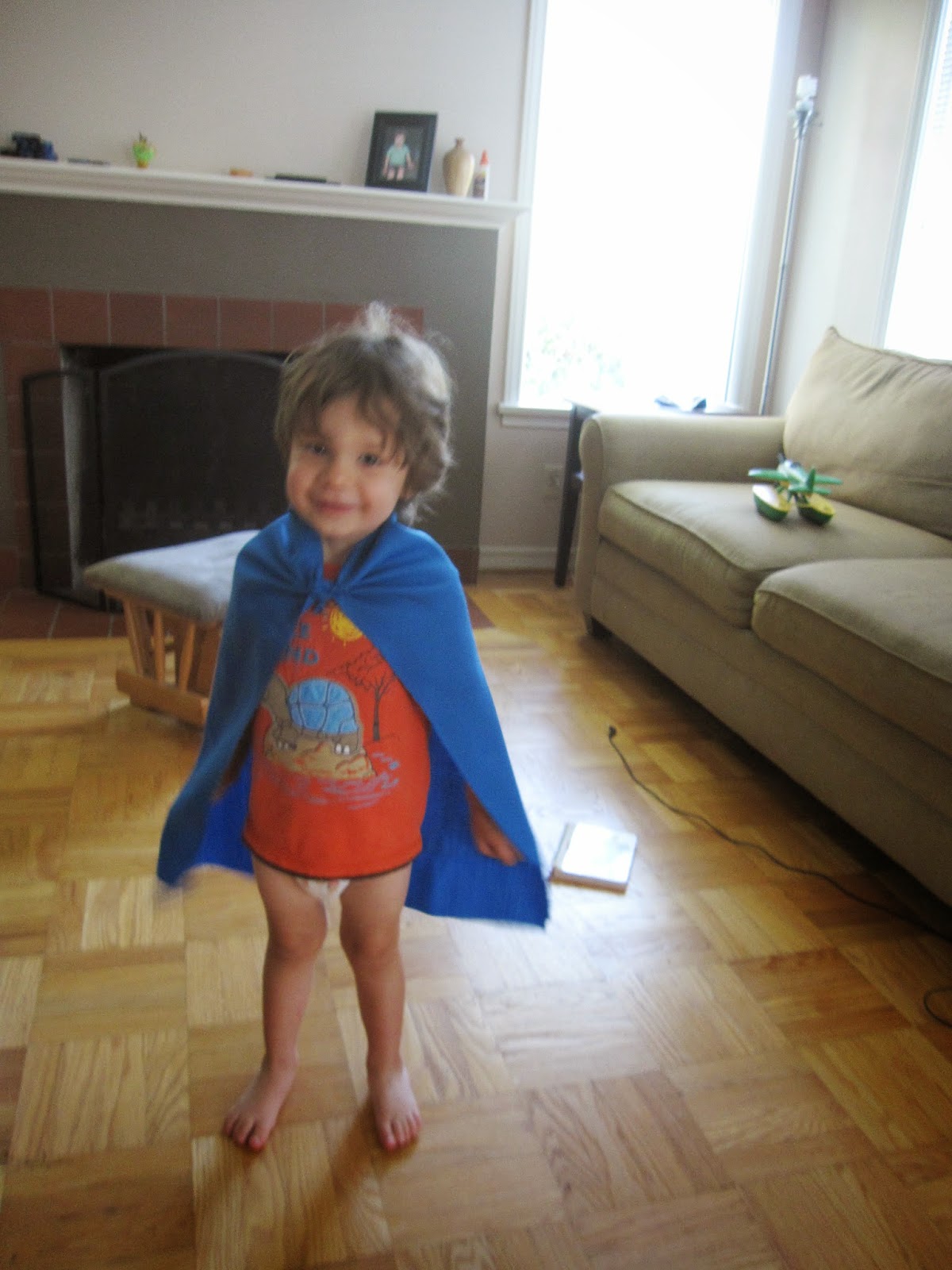 We also fit in a trip to Pioneer Square so she could buy some glass pieces for her bookshelves. And spent a day at Golden Gardens. This morning before she left we snuck in a trip to the Locks to check out the salmon. We had a friend of Gareth's with us, so it was a bit interesting trying to squeeze two boosters and a car seat in the back seat of our car. Thinking we'd play on the grounds a bit, I'd brought some frisbees with us. Unfortunately, we were there early enough that the grass was still quite wet with dew. And there were lots of geese around that had left lots of poop all over the grass. So we opted against playing on the grounds. Instead we went home and played there for a bit while Gram finished preparing to go and then went out to lunch before driving her to the airport. I took the boys to Golden Gardens again after we got home, where Malcolm loved the big kid slide (a huge deal, because he can be extremely hesitant toward playground equipment). 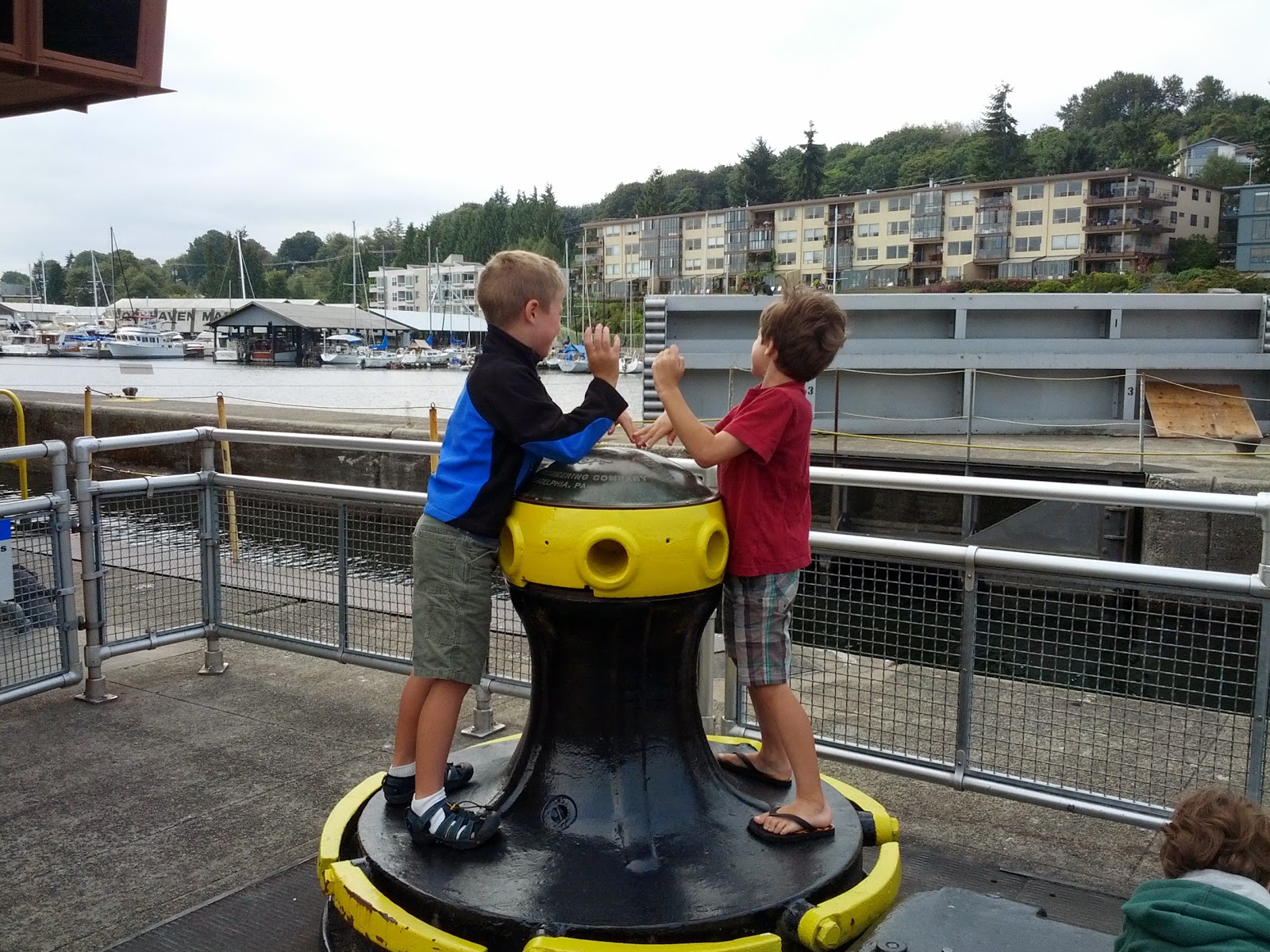 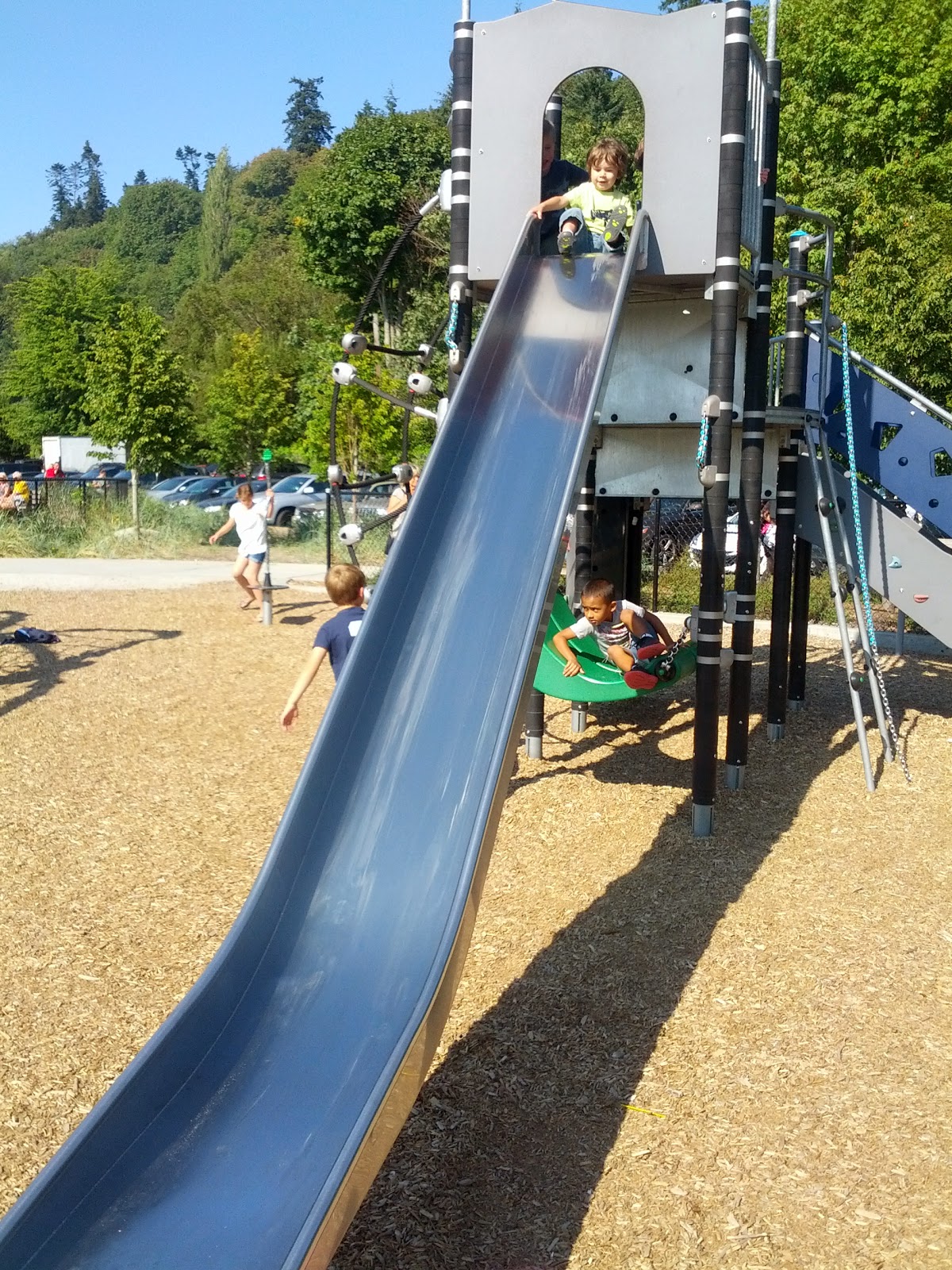 Gareth cried several times today because he was so sad to see Gram (and her tablet) go. Malcolm, of course, had no idea she was leaving, so he was less affected. And he fell asleep on the way to the airport, so he didn't even get to see her leave. It took him the whole trip home and a trip to Golden Gardens before he realized she was gone and asked, "Ere's Gam?".
Posted by Erin at 5:38 PM

I love your mom! How lucky for you guys to play with her for 10 days!

Love seeing your mom again after all this time, even if just in a picture.

It was fun to see pictures of your house. I really like those prints your mom got.

I watched the rant clip and it made me laugh. It's so true. Accent pillows are completely pointless. That said, I recently purchased several of them. Because it's a much cheaper way to change the look/feel of a room without buying new furniture. I'm sure yours look good!