I've been excited for our second camping trip since I reserved the site back in early June. I was looking up our Burke Museum membership and seeing where else we could get in for free with the membership. The one place is way over in eastern Washington and I knew there'd be no way we'd make it over that far. But the other place is the Marine Science Center in Port Townsend, just a couple hours away. Then I noticed that it's located in a state park (Fort Worden) and decided to see if we could camp near there. Fort Worden didn't seem likely since you can make reservations up to a year in advance, but Fort Townsend is just 15 minutes away. It was all booked up for the weekends through the summer, but we decided to check out mid-week and found a nice, large site available for the 27th-29th. 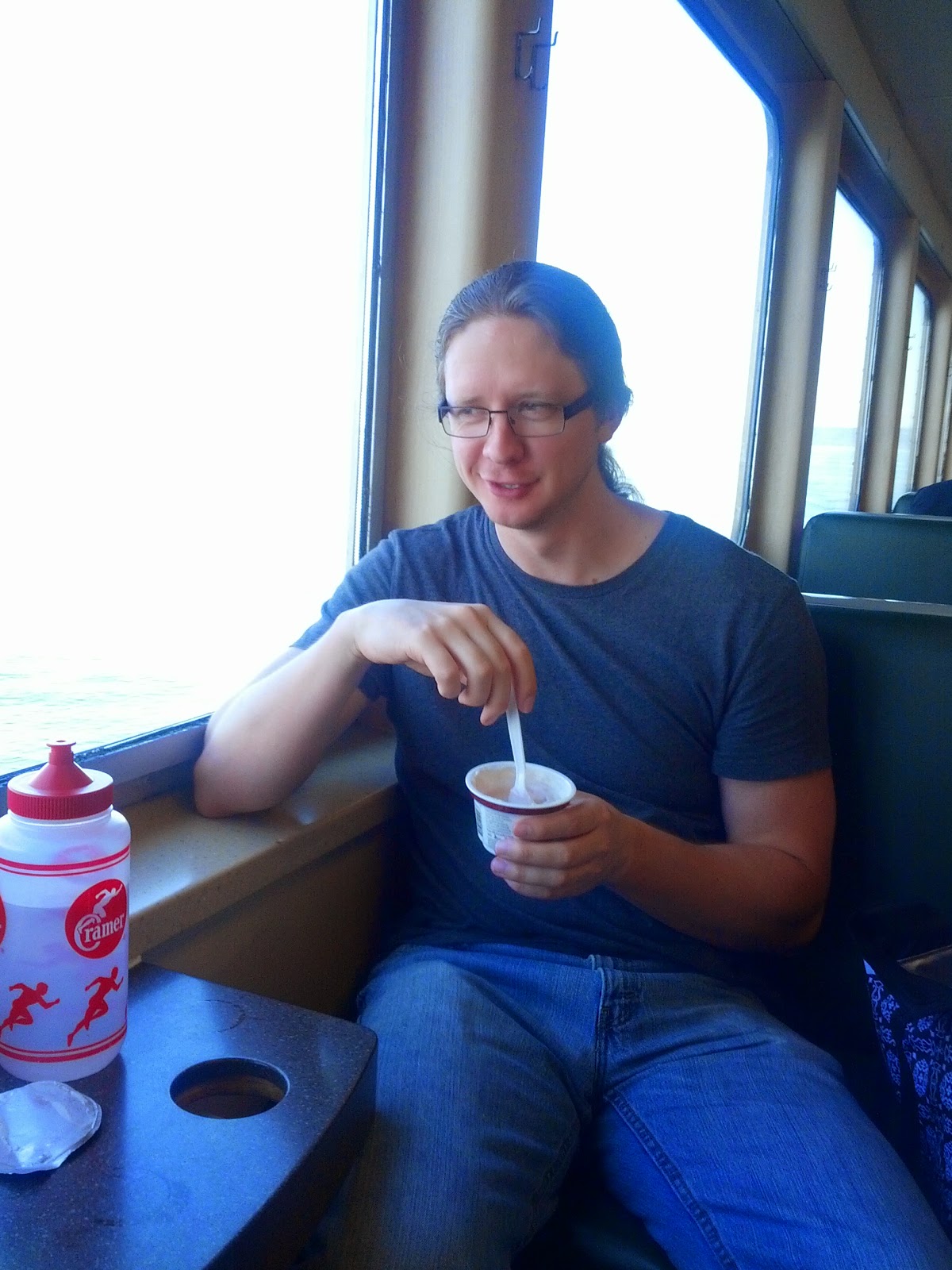 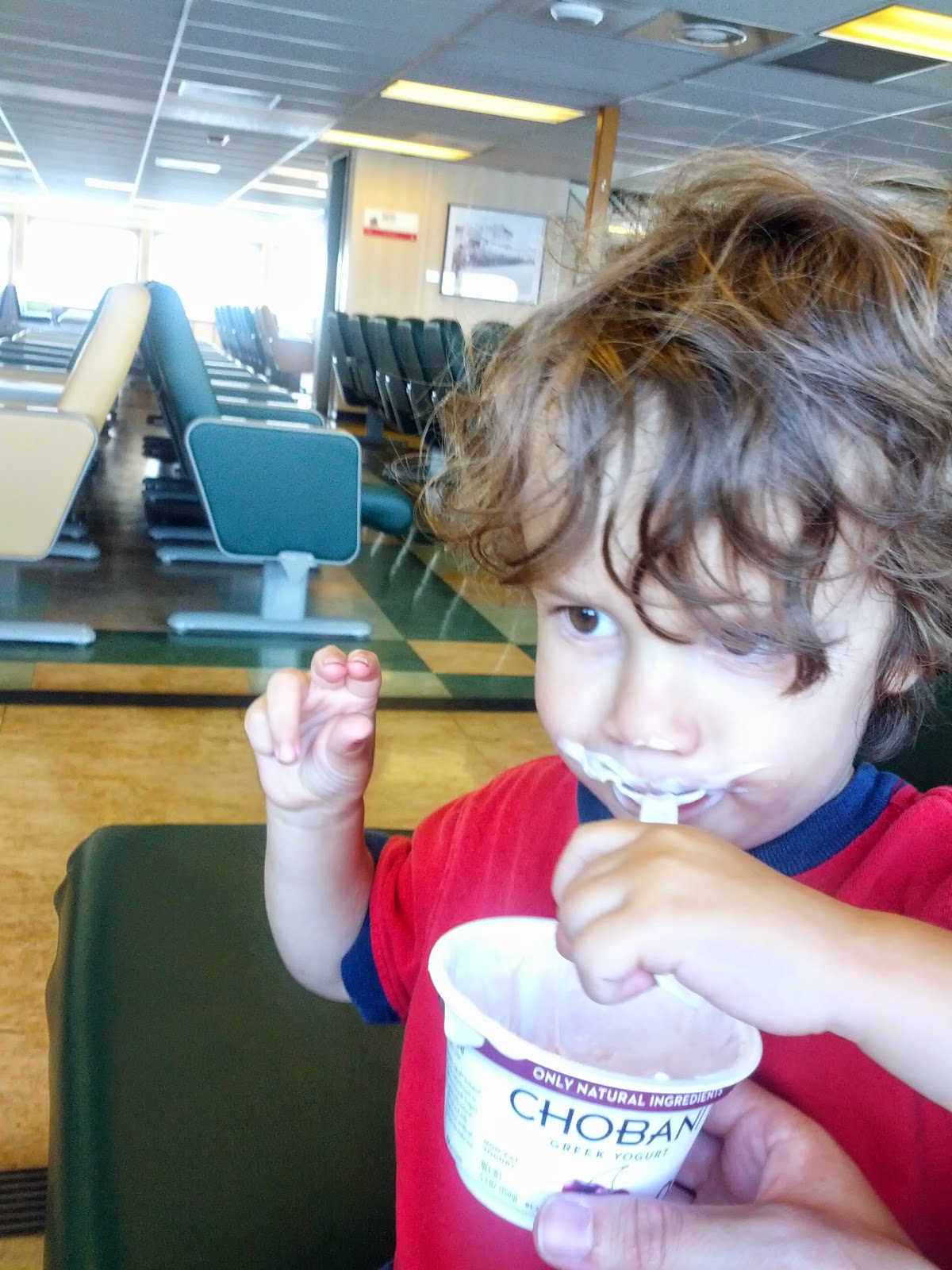 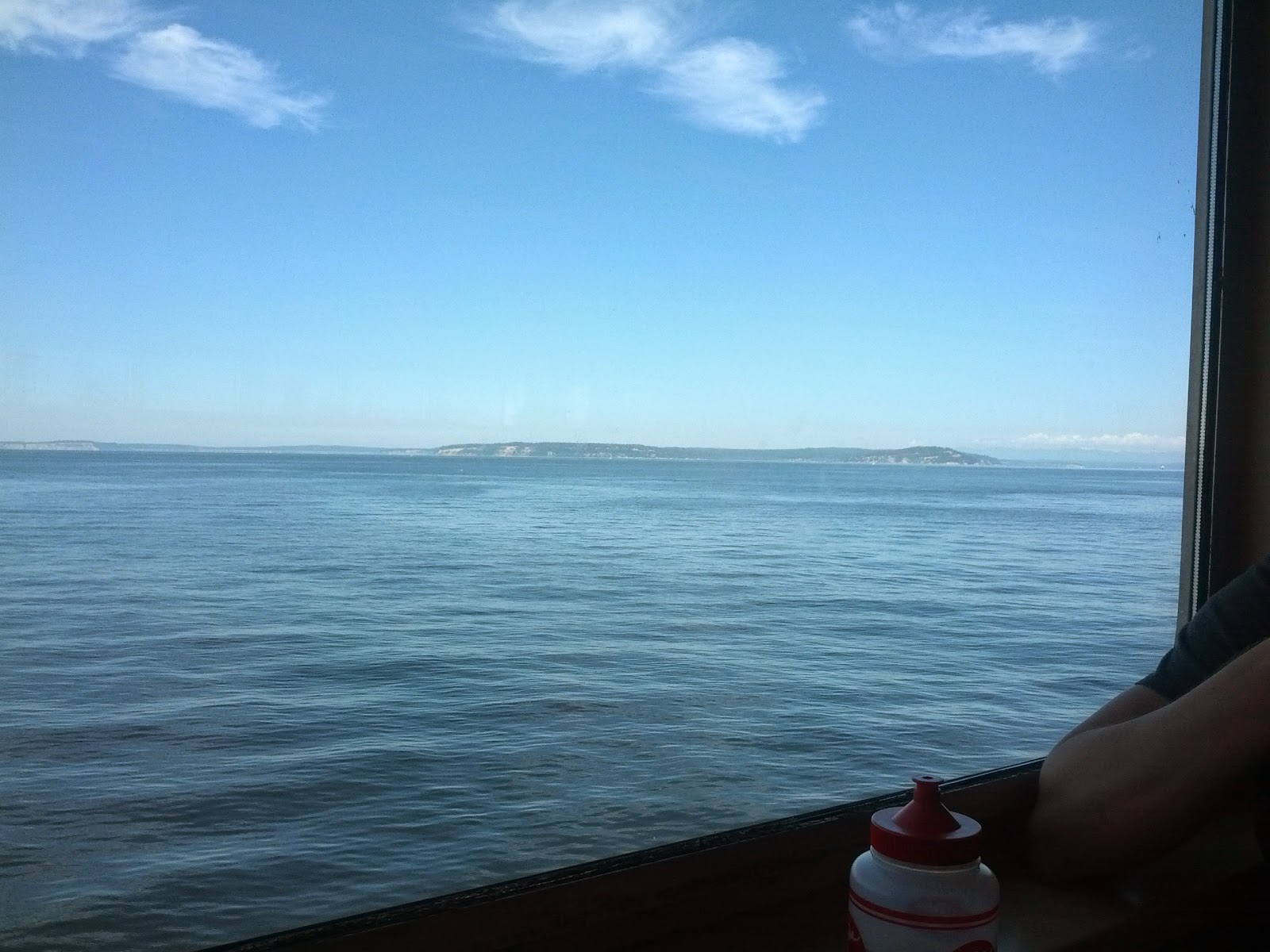 Our huge campsite. We could've fit our tent plus a couple smaller tents on the site if we'd wanted to. I kinda liked having a huge site. 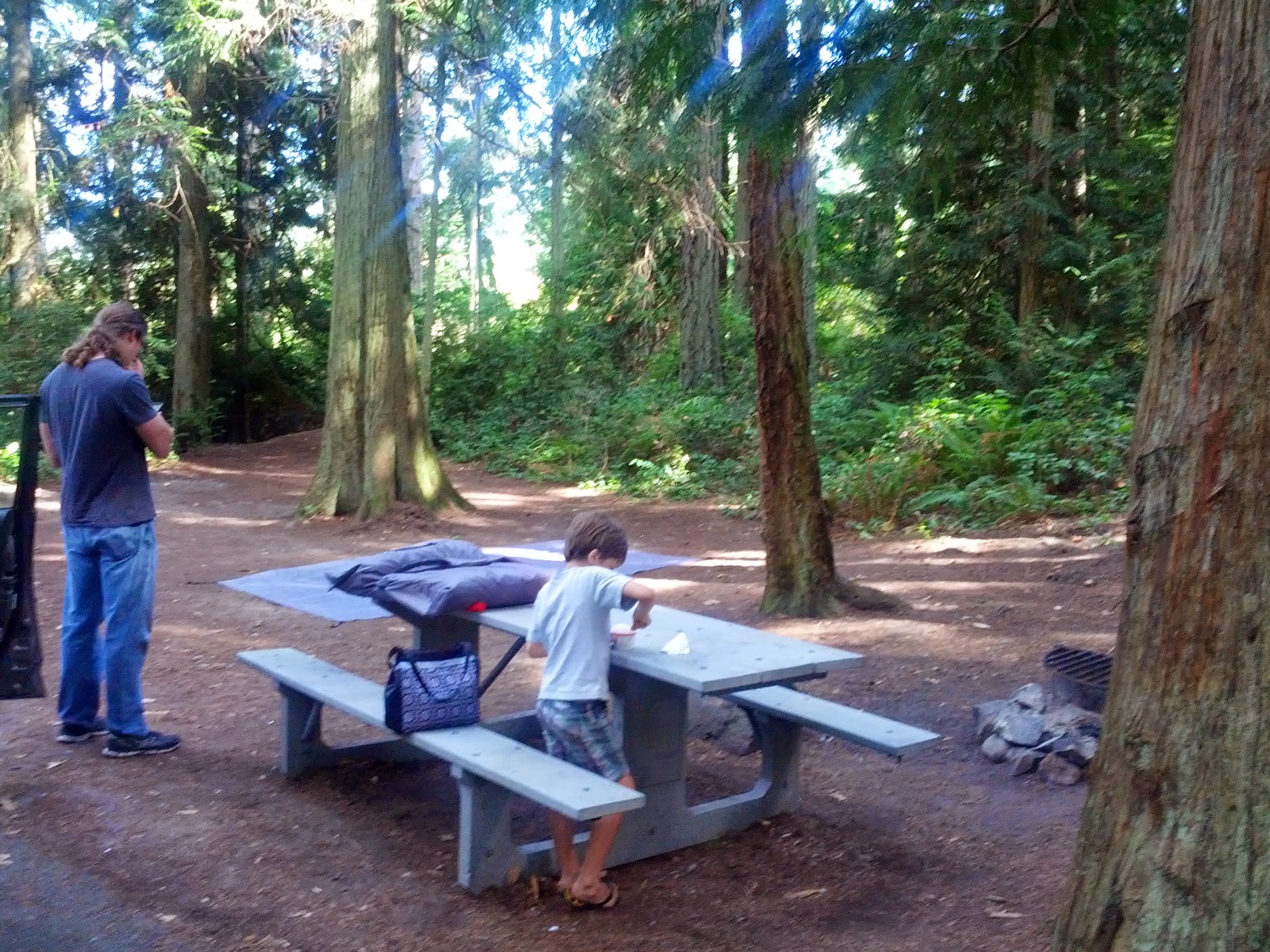 Malcolm really wanted to help put up the tent, but since Daddy wasn't letting him hammer in the stakes, he decided he could hammer some wood instead. 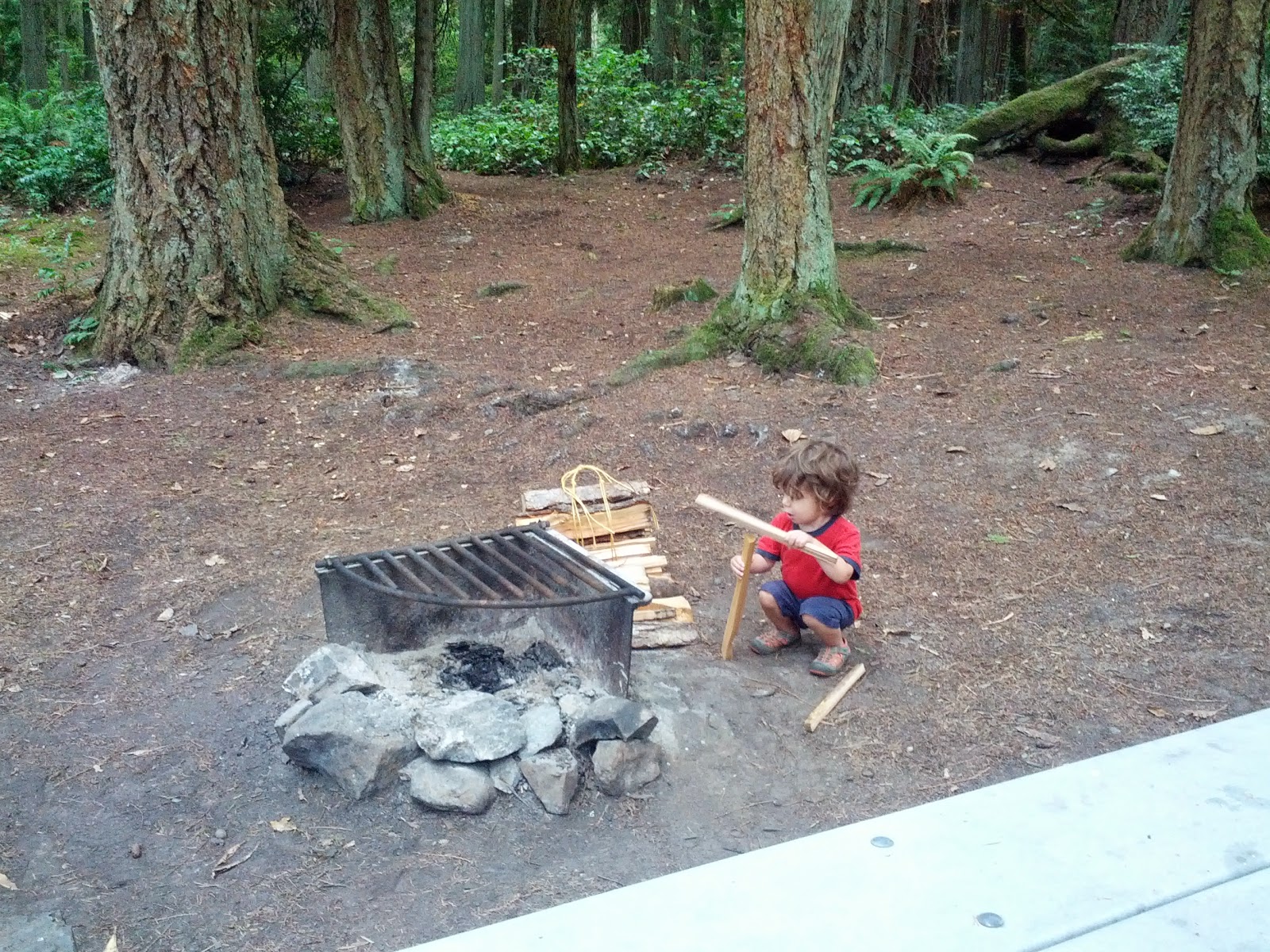 Gareth was excited for a fire and marshmallows (as was Malcolm; he was constantly asking to see/play/make fire and for "smasmellows") and scary stories. Most of the stories weren't actually scary, but Ryan managed to succeed in scaring Gareth with a couple of them. Unlike me, Gareth seems to enjoy being scared, so he kept asking for more. 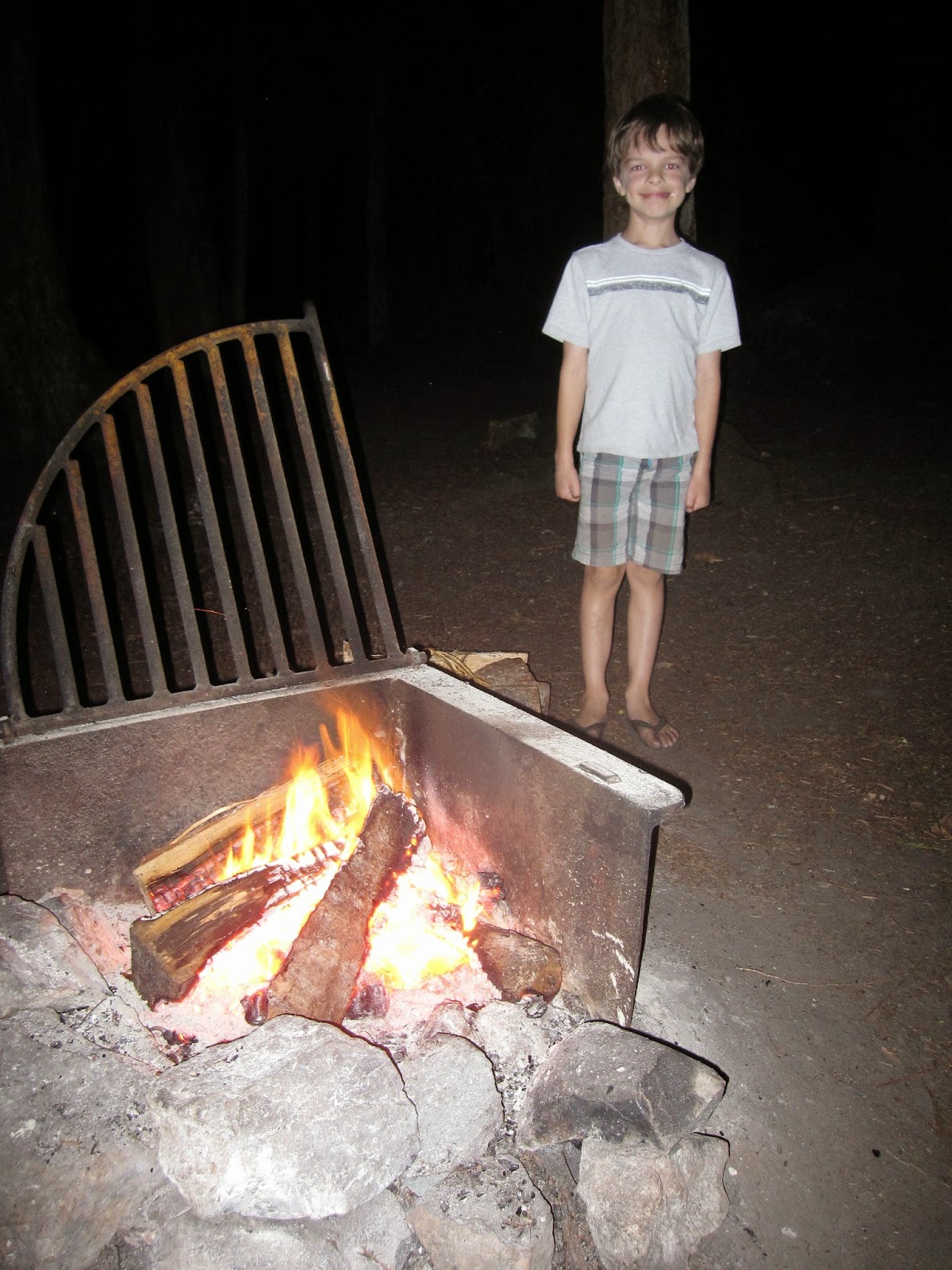 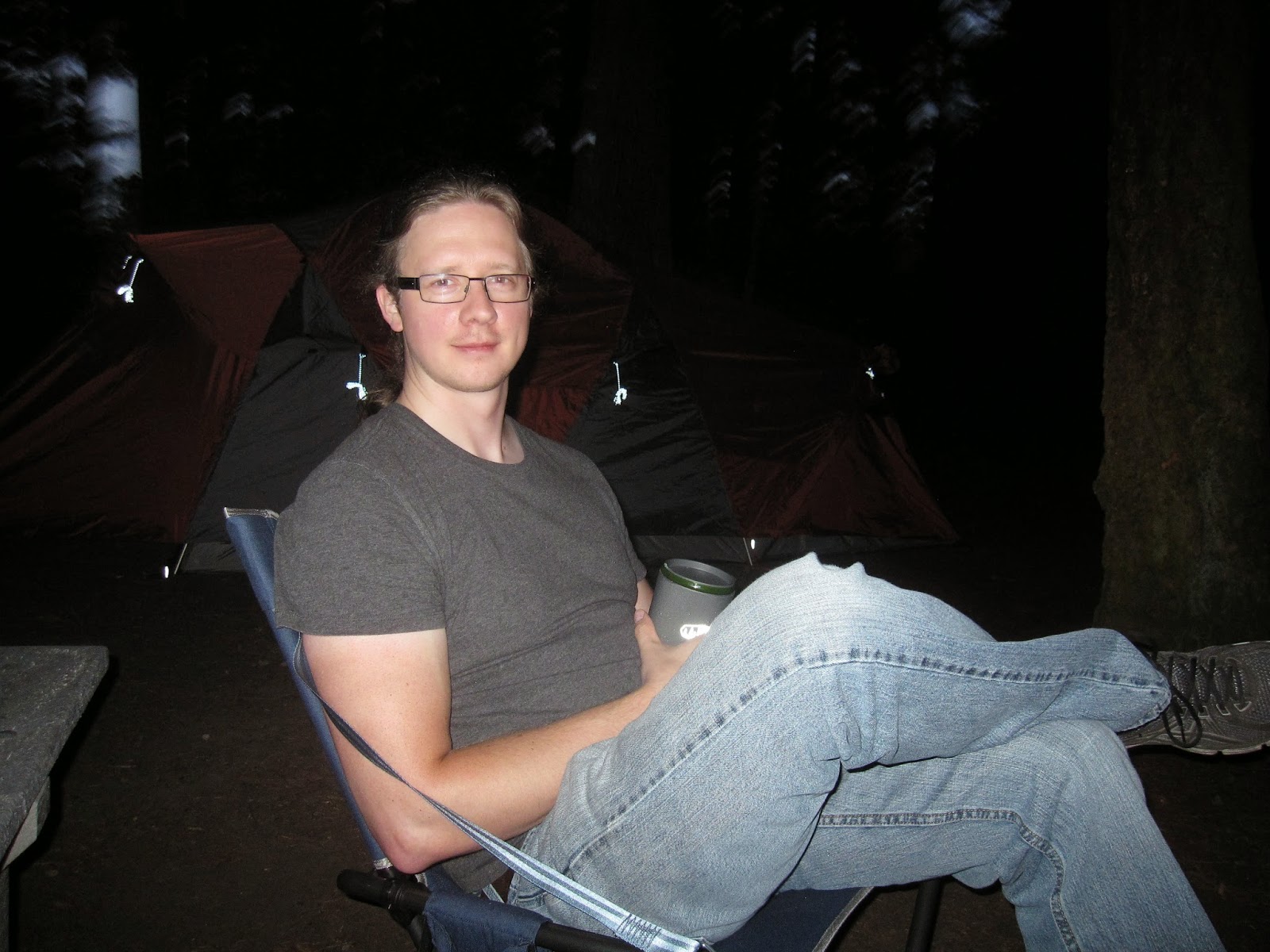 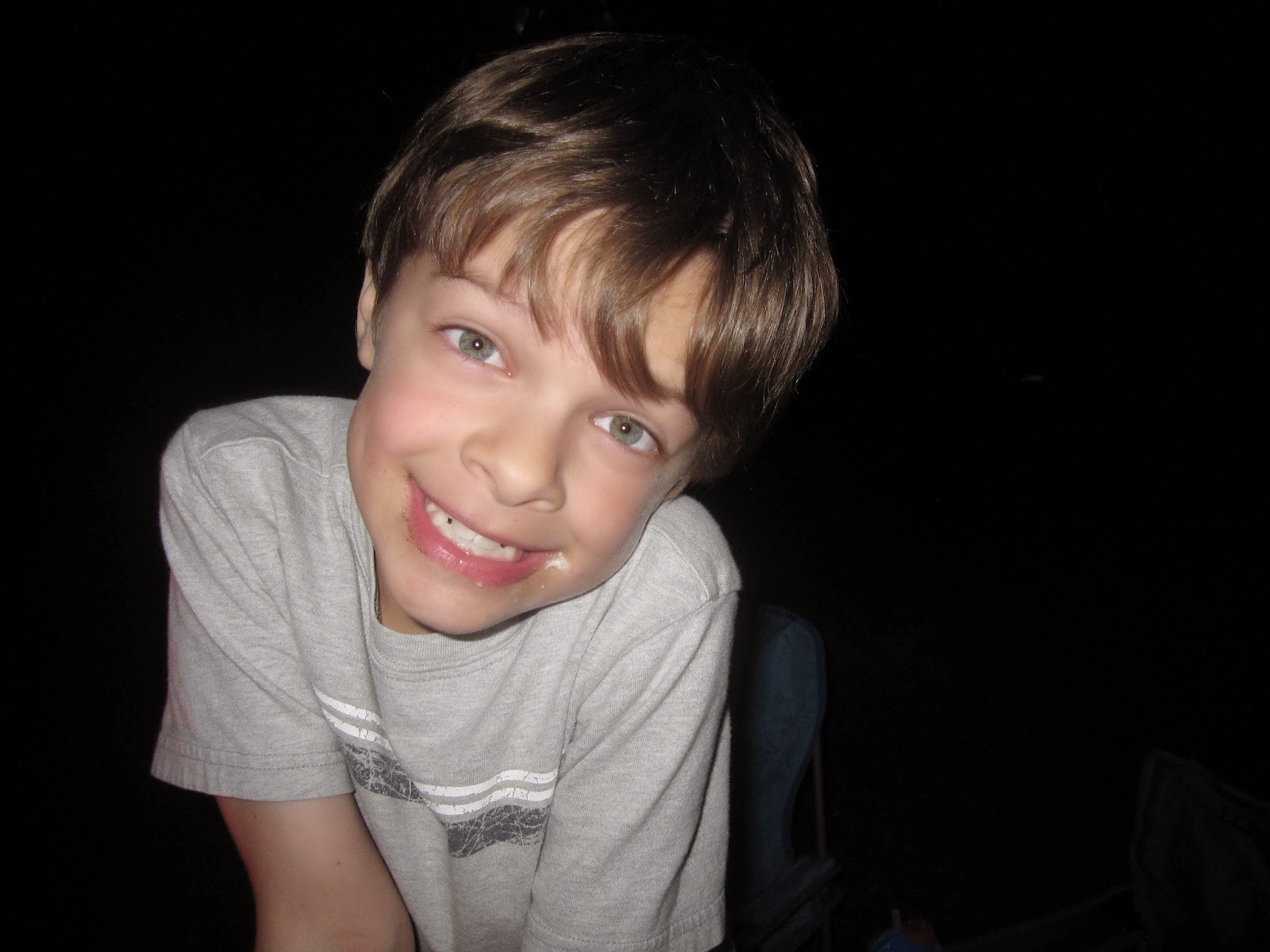 Gareth's really into making silly faces for the camera. 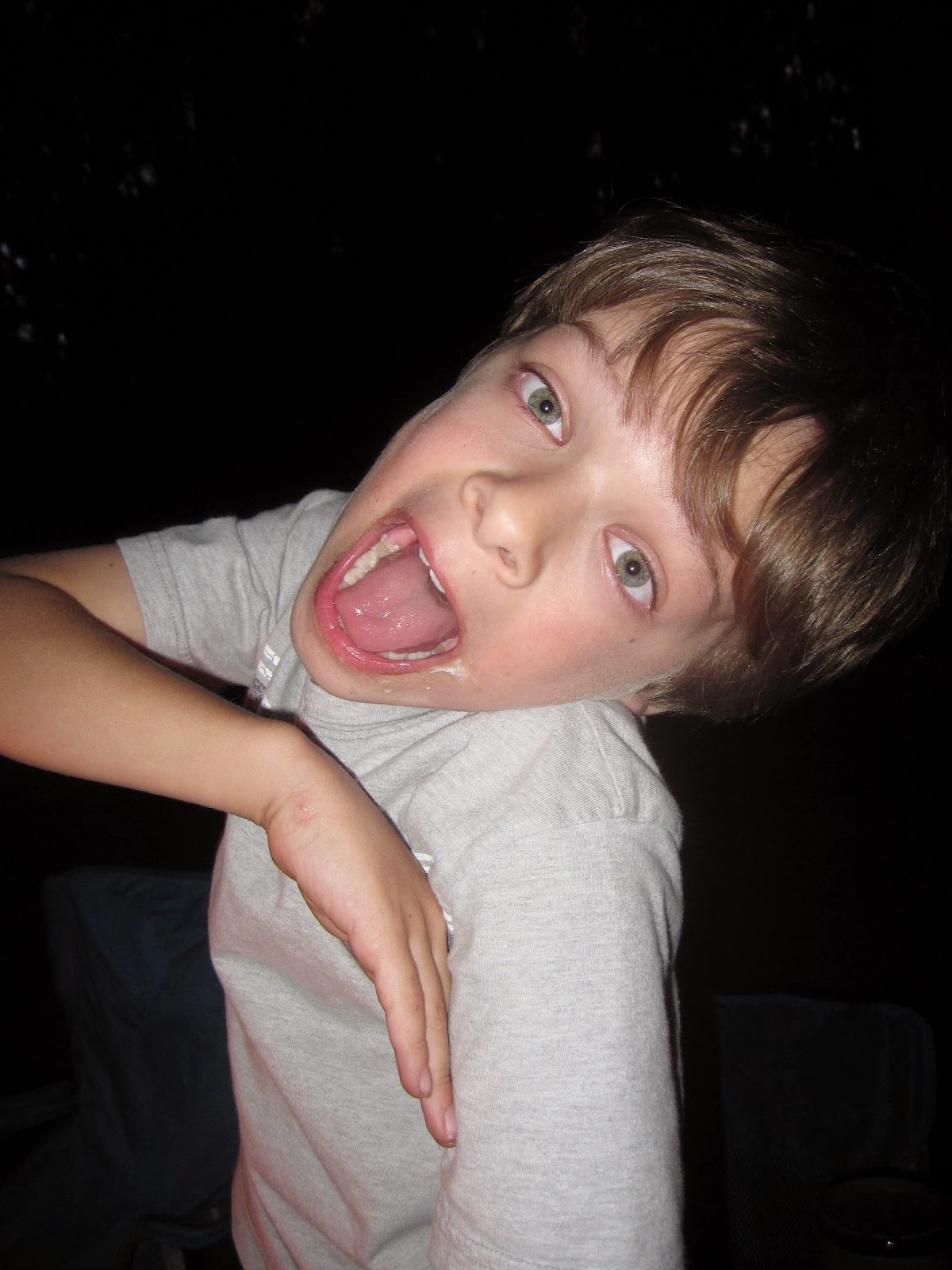 Malcolm hanging out either before or after our short hike. We kept the hike less than a mile since Malcolm is very into being carried right now. He'll walk for a few minutes and then run back to me saying, "I'll carry you! I'll carry you!", which, unfortunately, doesn't mean he's going to carry me. Gareth could not, for the life of him, remember that there was a big rock right here and kept falling over it. 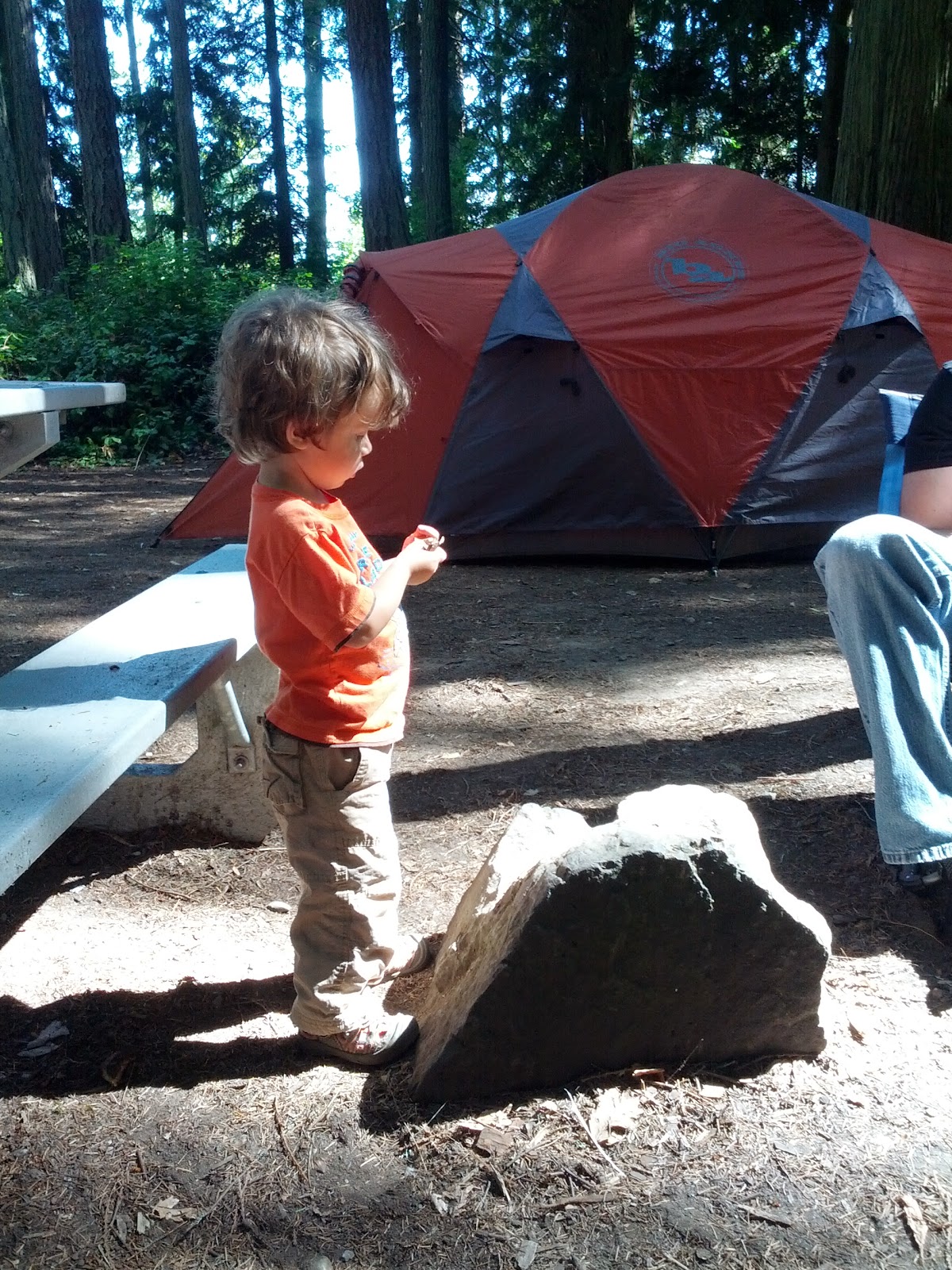 Dirty face! It was smudged in dirt pretty much the entire time. A dirty face adds to the cuteness when you're camping. 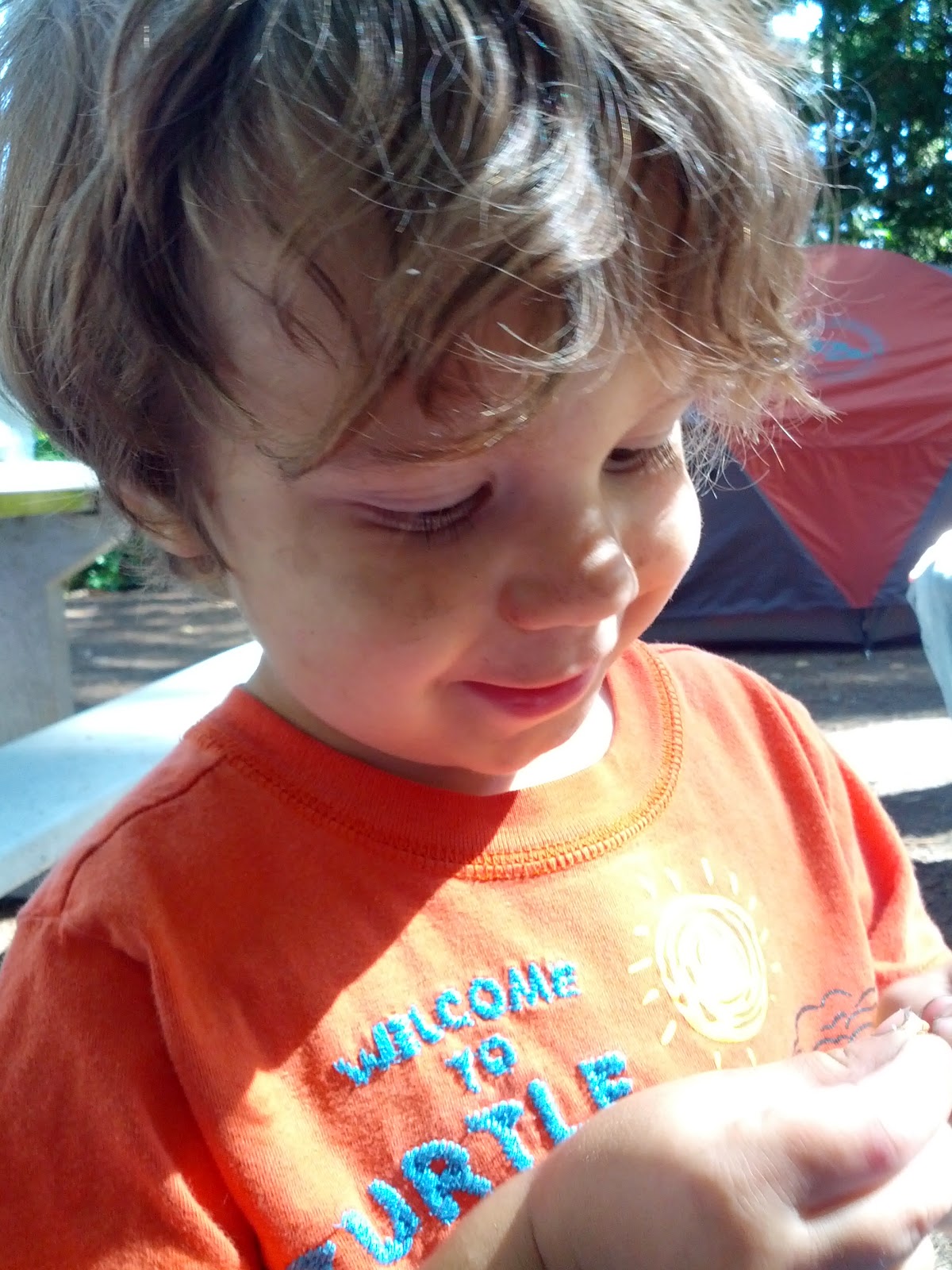 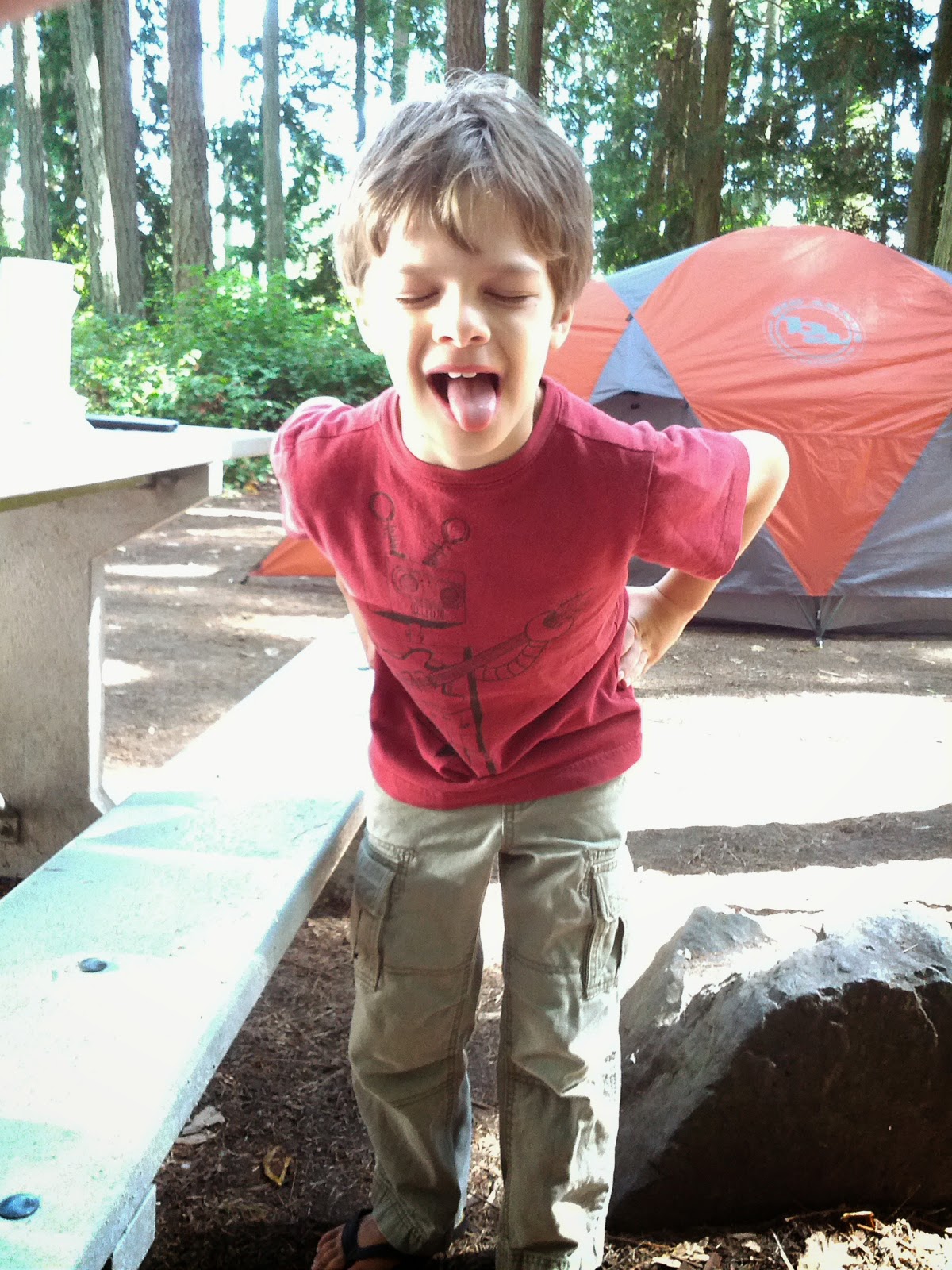 Marine Science Center. They didn't have many sea stars to touch because of sea star wasting, which some of their scientists are helping to research and determine the cause(s) of. But there were a few you could touch, which Malcolm was a huge fan of. 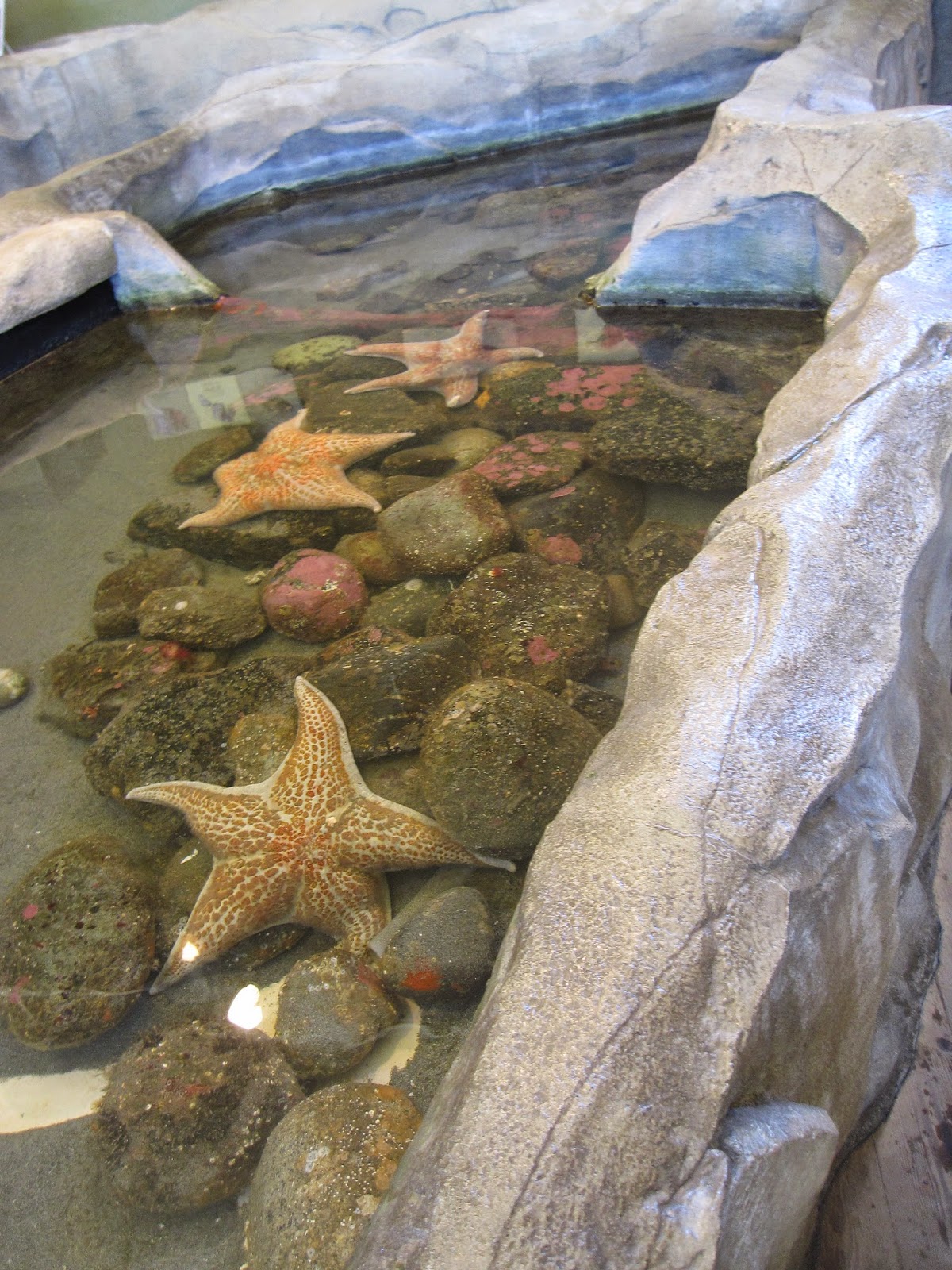 Gareth loved looking at the plankton sample in the microscope: 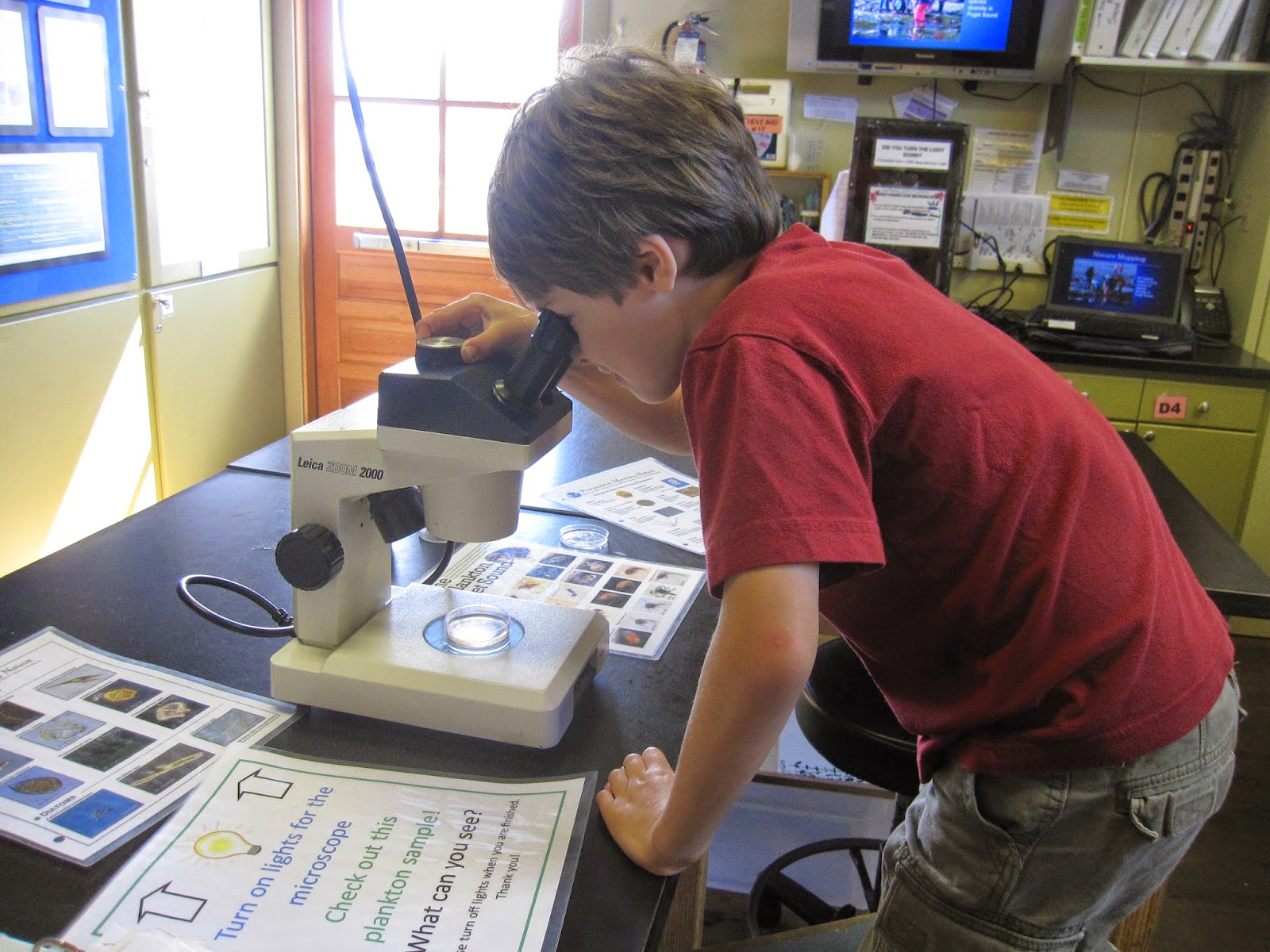 Another building housed the orca exhibit and this whale head that you could touch to feel the baleen. 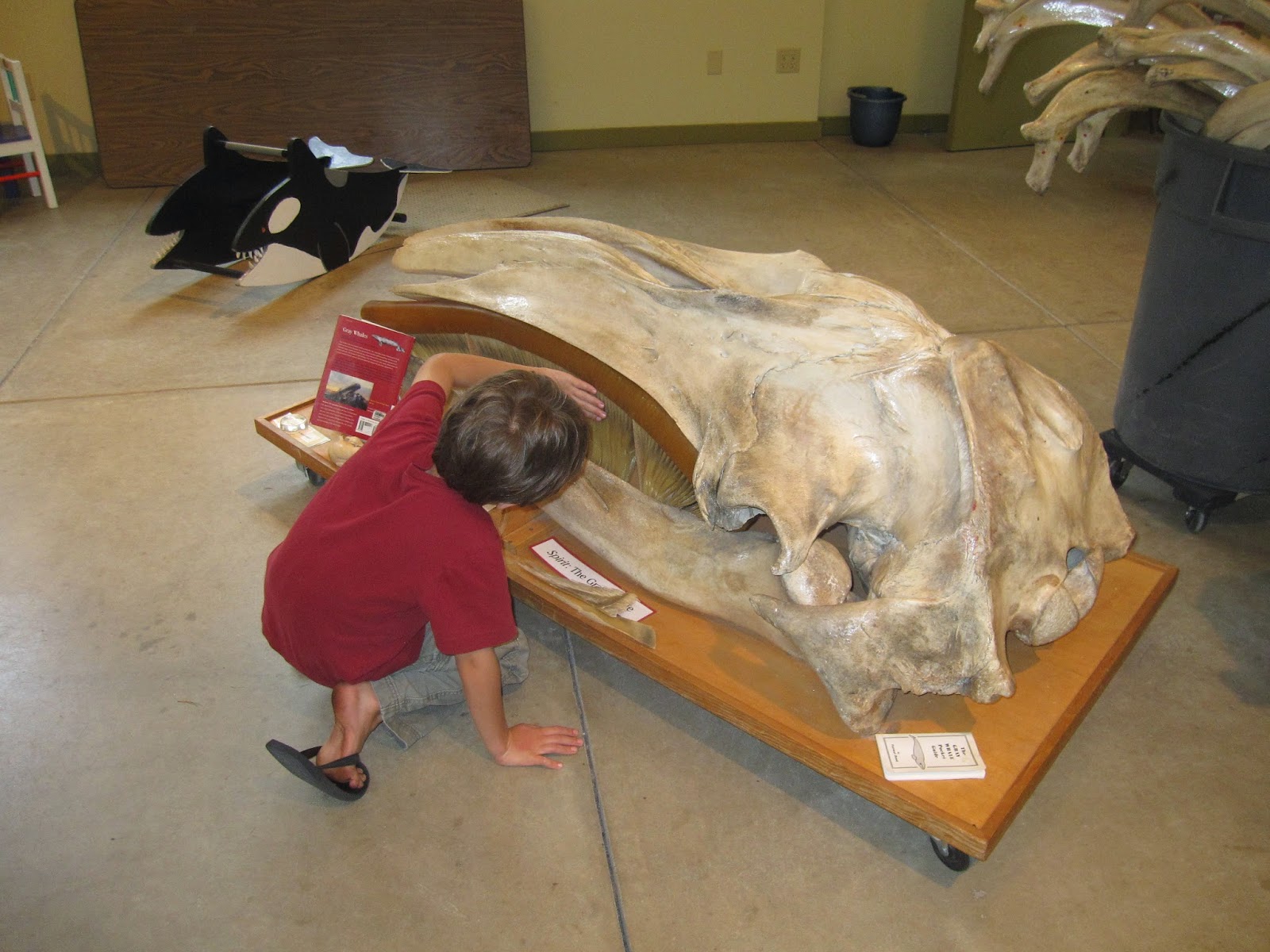 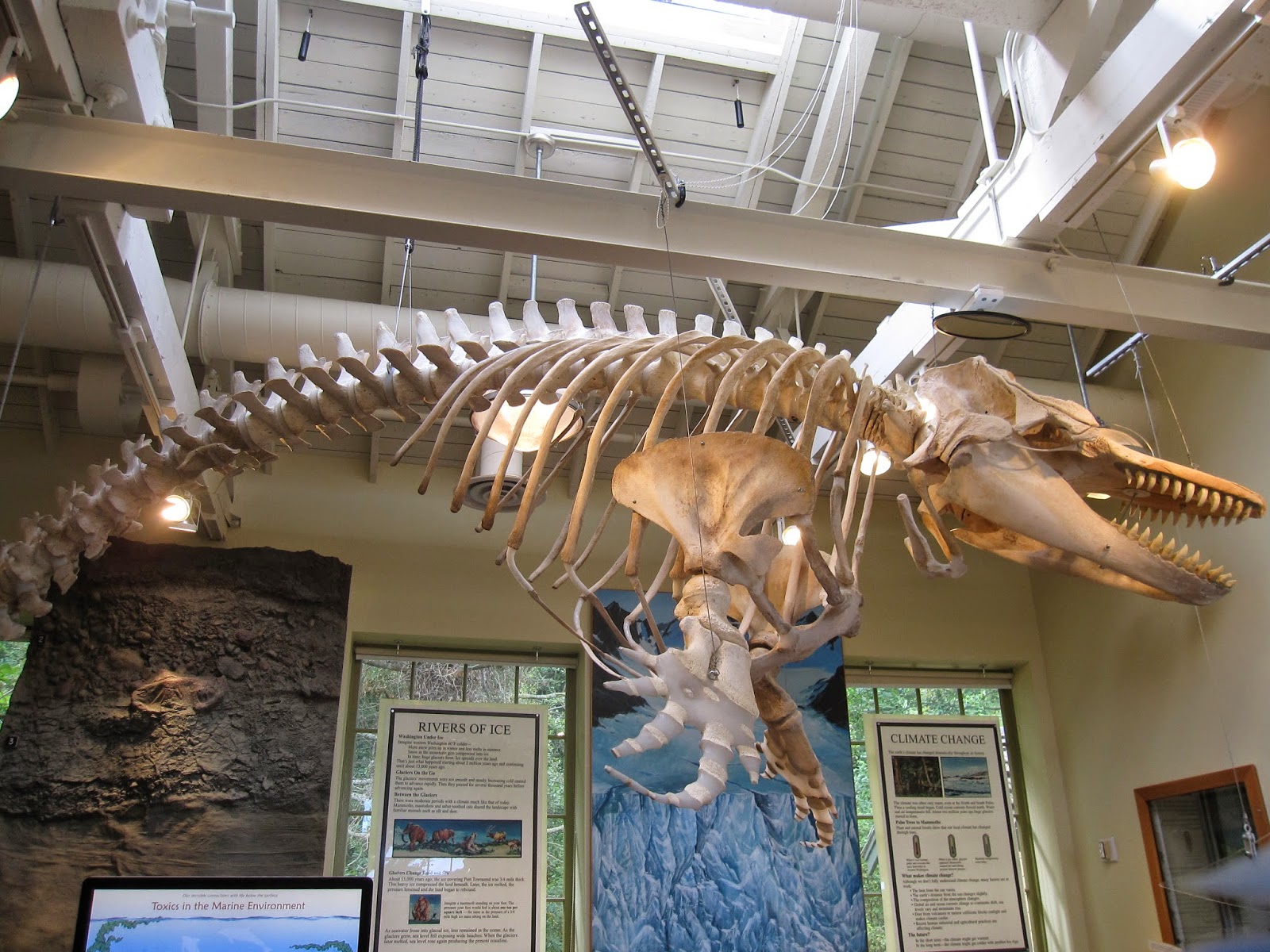 The boys loved touching the tube worms and the anemones. The tube worms pop back into their tubes fi you touch them, which the boys found hilarious. 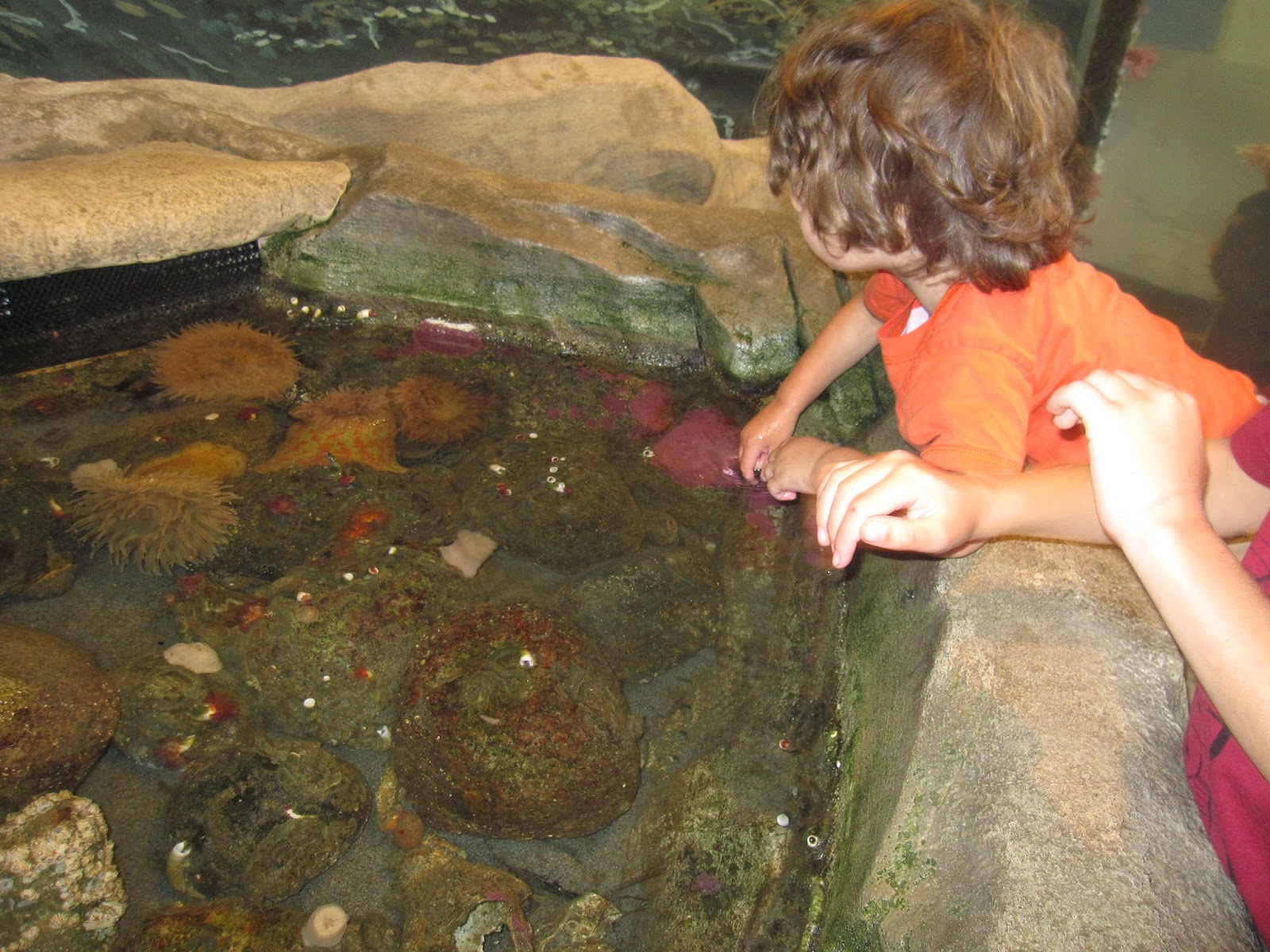 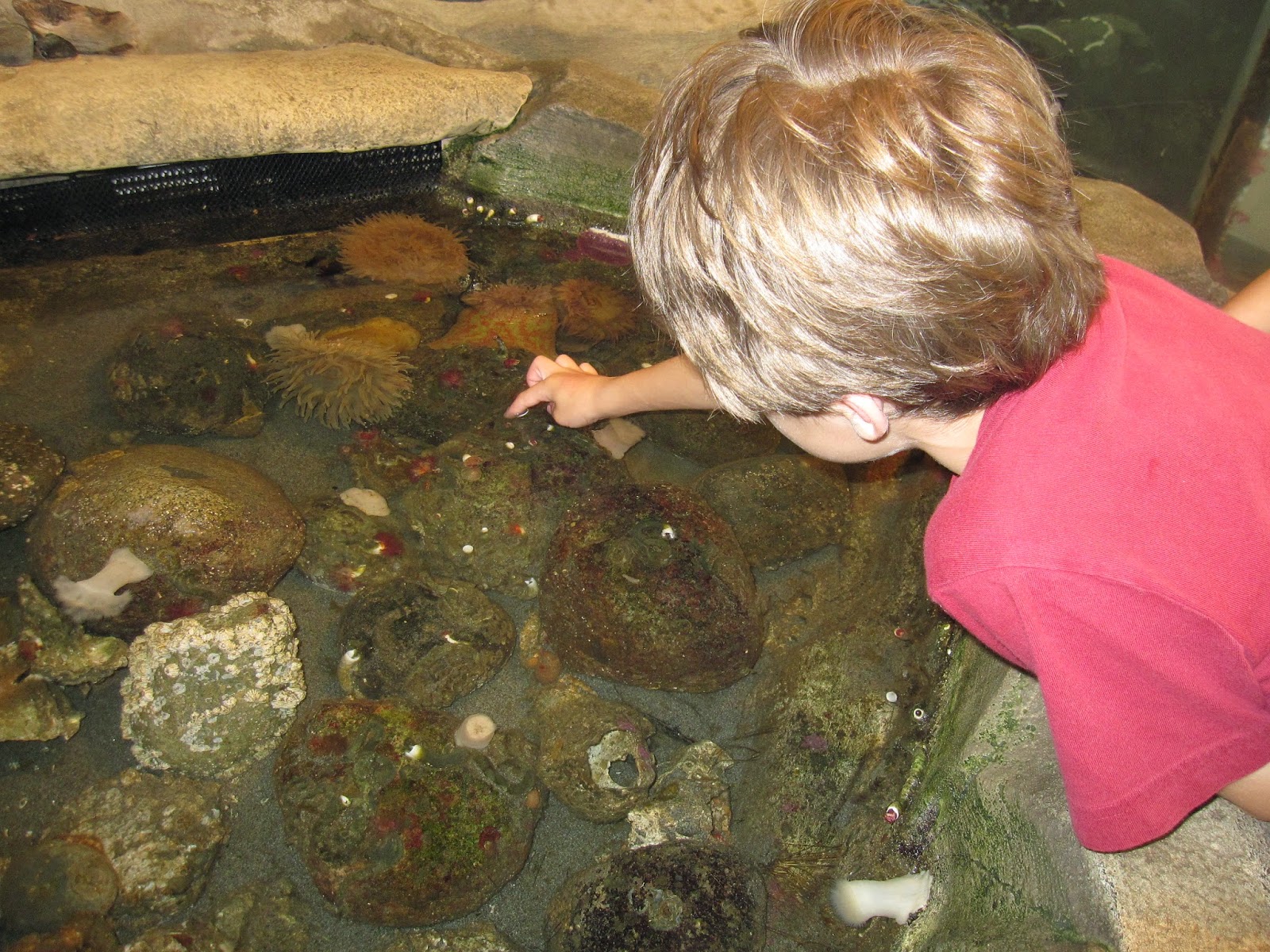 Back at camp, working on a s'more 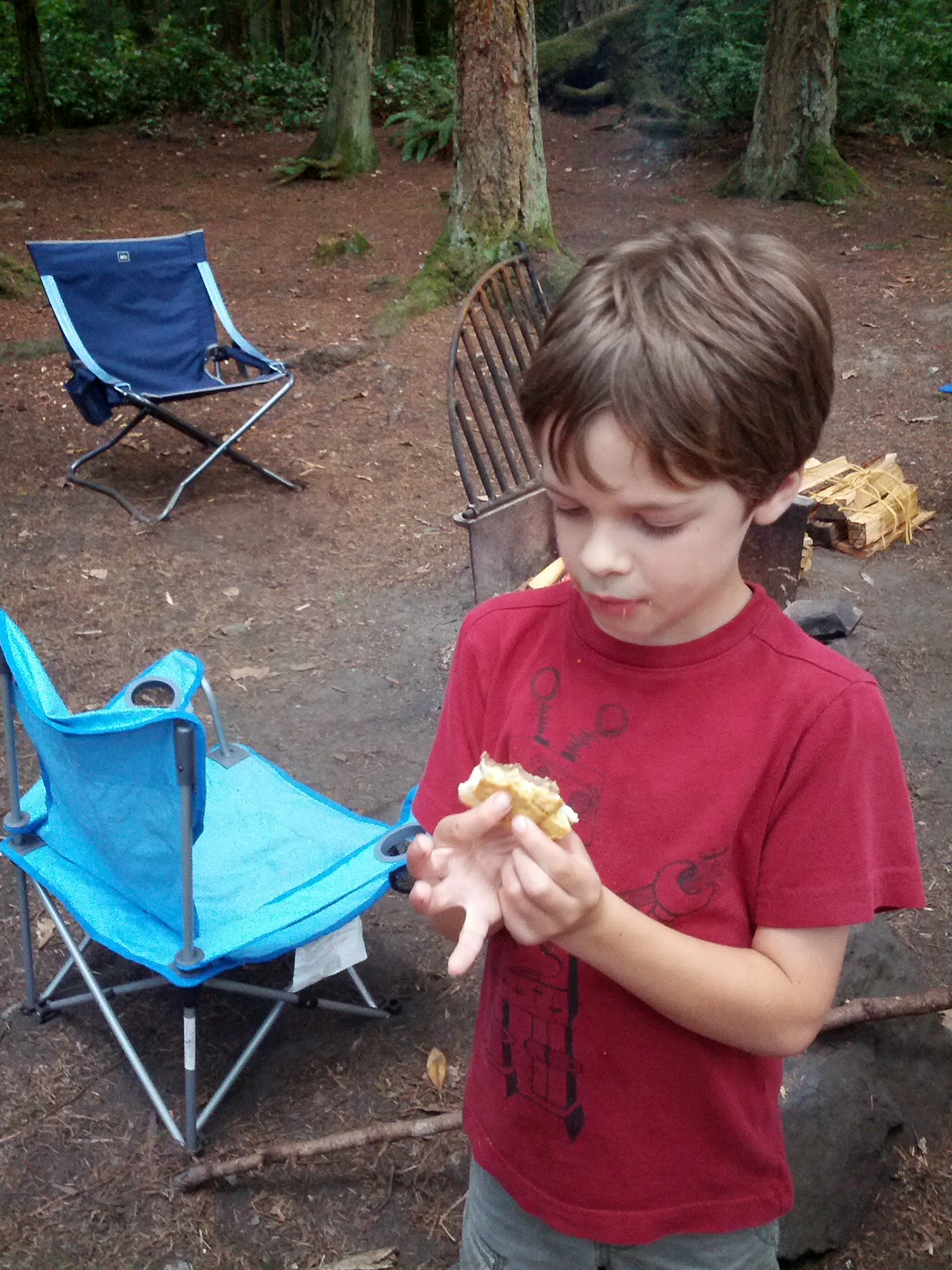 Ready to head home late Friday morning. We tried to pack up the tent before the rain hit. We didn't quite make it, but luckily it was just a sprinkling, not a downpour. Gareth was sad that we couldn't stay longer and has asked for a longer trip next time around. Cute Mal with his dirty face. Gareth biting his hand for some reason? 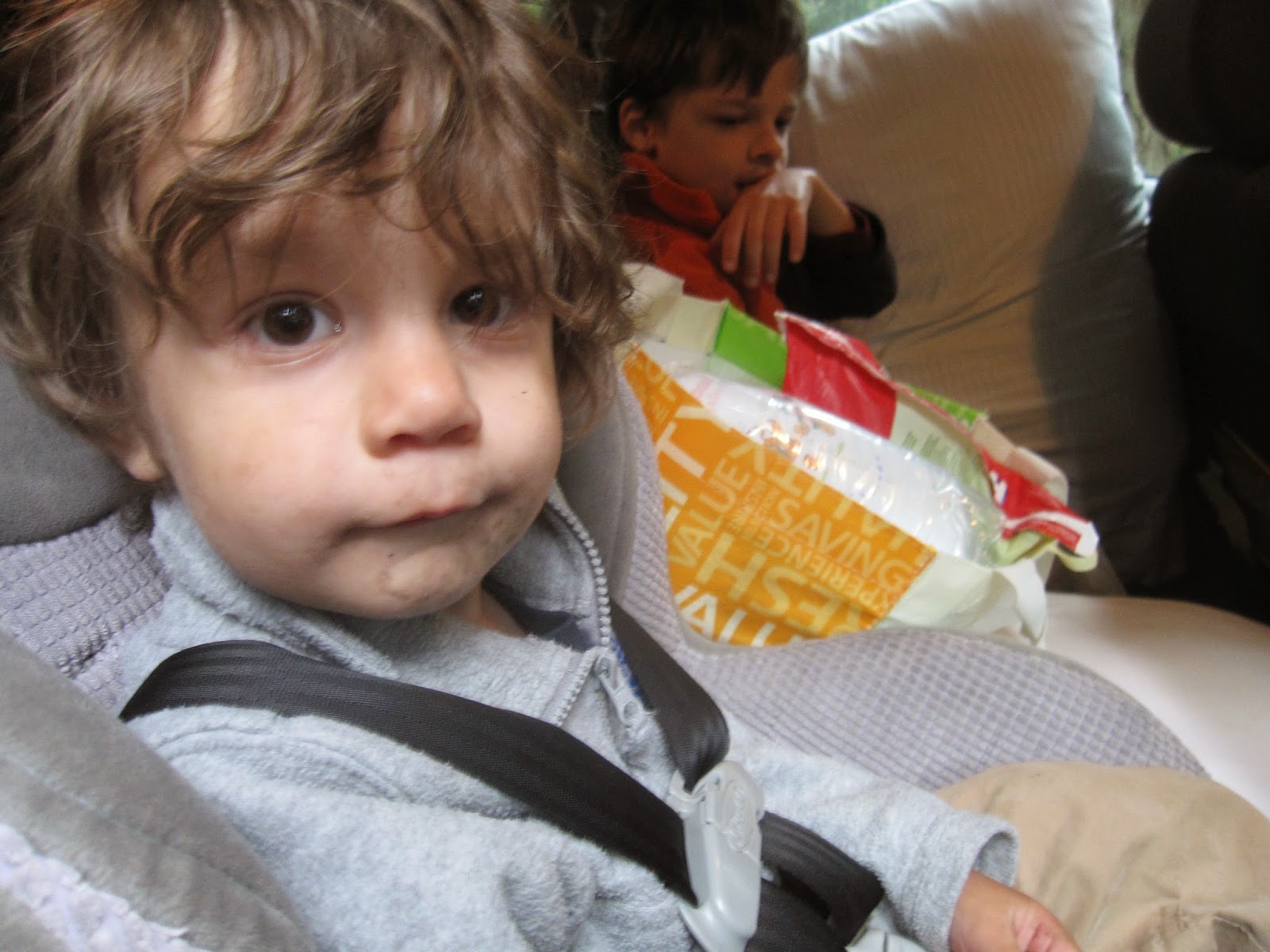 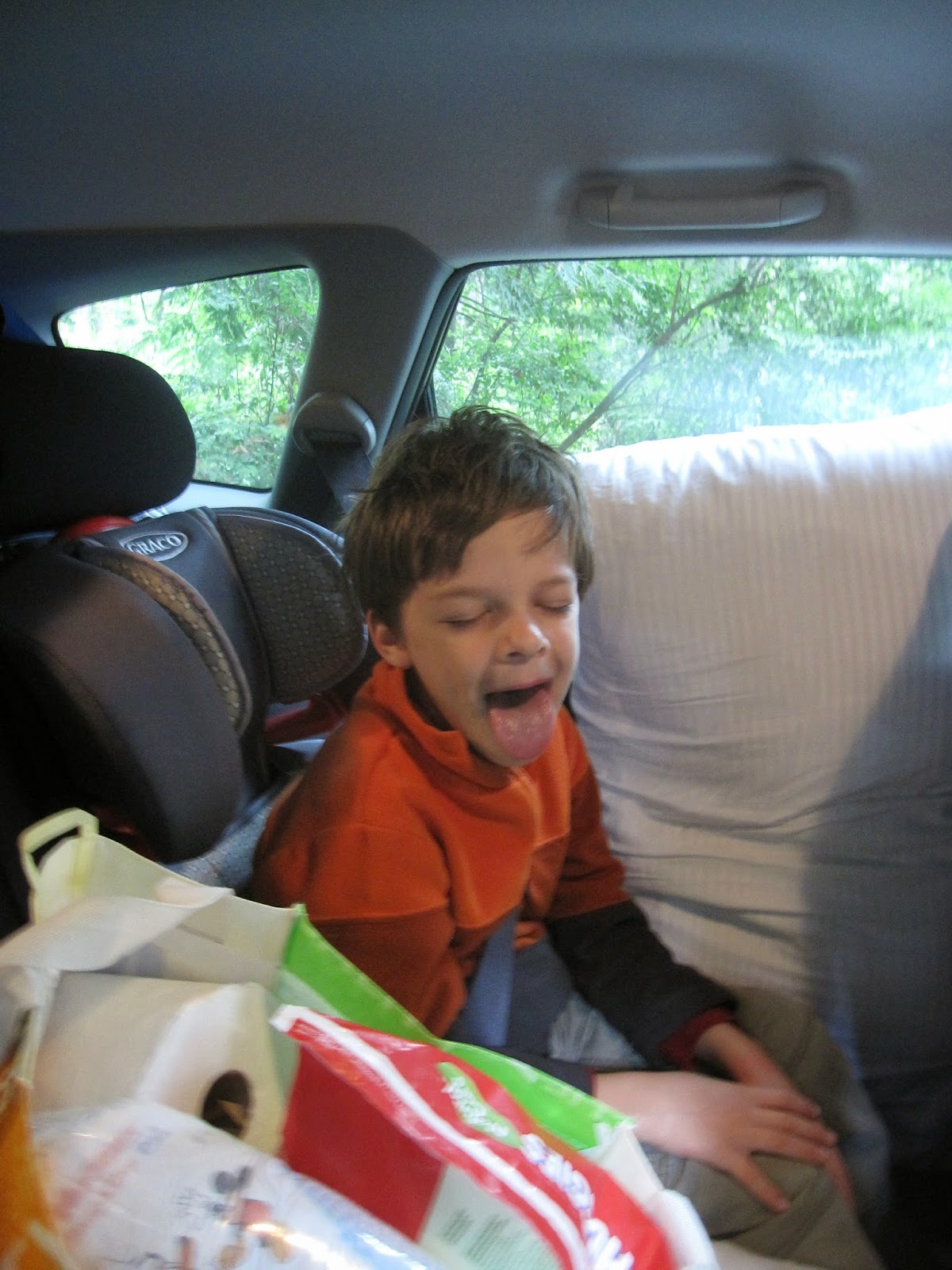 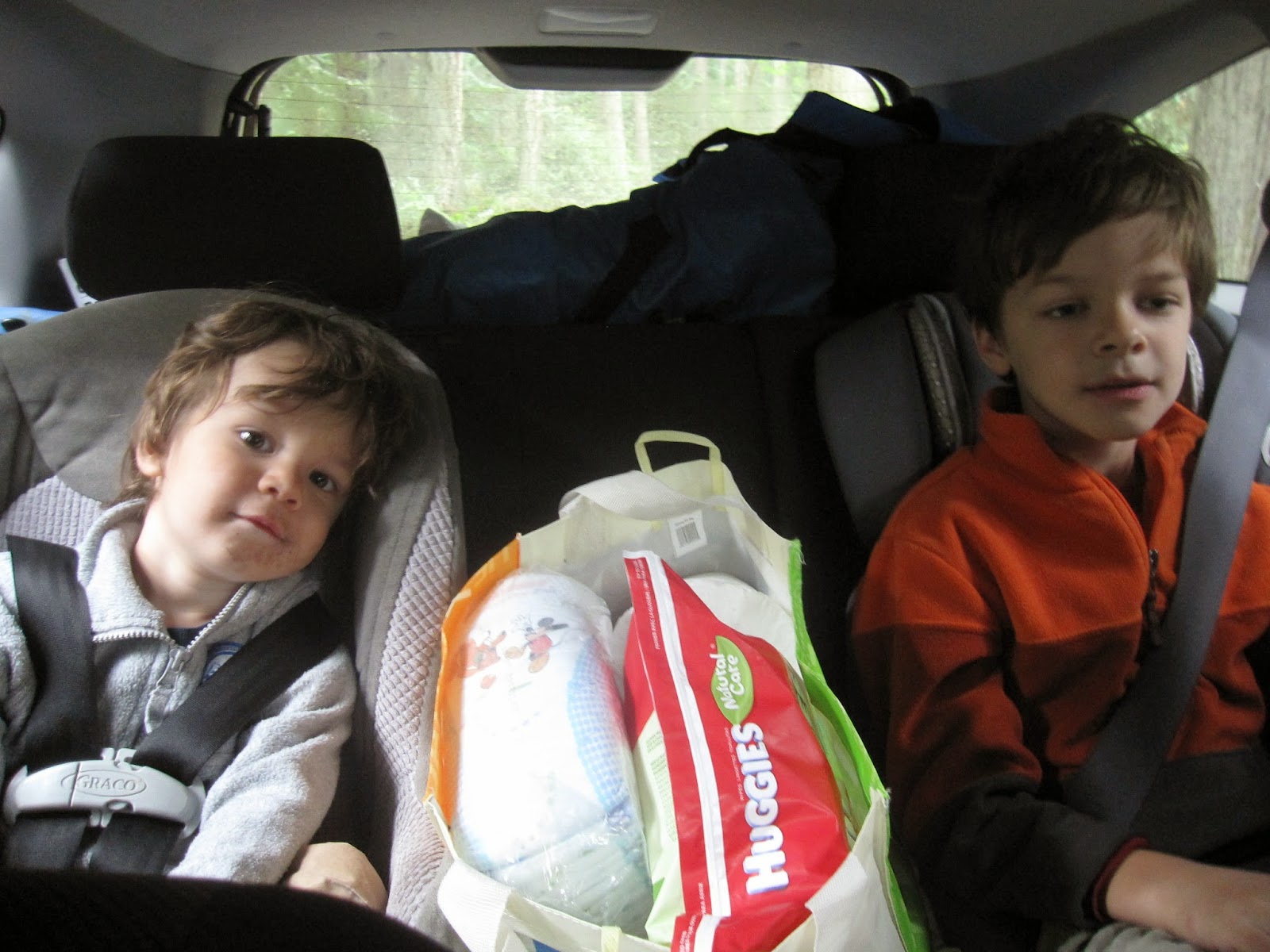 I tried out a couple new recipes on this trip, chicken noodle soup and honey-rosemary lamb sandwiches, both of which were good and will stick around in our camping food repertoire. Ryan still didn't sleep well on this trip, despite the much improved conditions, so we're going to look into other sleeping options for him so that he can enjoy our trips more. Other than that I think we can say that this camping trip was far more pleasant than our previous one.
Posted by Erin at 3:10 PM

What a fun camping trip!