Friday morning I checked out the vendors again while friends were at a festival choir rehearsal, this time with the intent of trying some A clarinets. A bit of sticker shock when I realized how significantly prices have increased in the past several years. A new A now costs about $4500 and my Bb that I bought in college for $3500 would now cost about $6000. Yikes! I need a new A, but quickly decided I'd be looking in the used category for a "new" one. Luckily, I found Lohff and Pfeiffer, a company based in Amsterdam (just opened an office in Bloomington, IN) that overhauls new clarinets from the factory, but also used clarinets. They'll be in Seattle in the fall, so I'm hoping I can find something good then for a more palatable price.

As soon as my friends were done rehearsing, we met up at the hotel and prepared to set out for New Orleans. Unfortunately we'd be missing some awesome recitals/lectures at the conference that day, but with it being unlikely I'll ever be in Louisiana again I decided a day trip to New Orleans was a must. 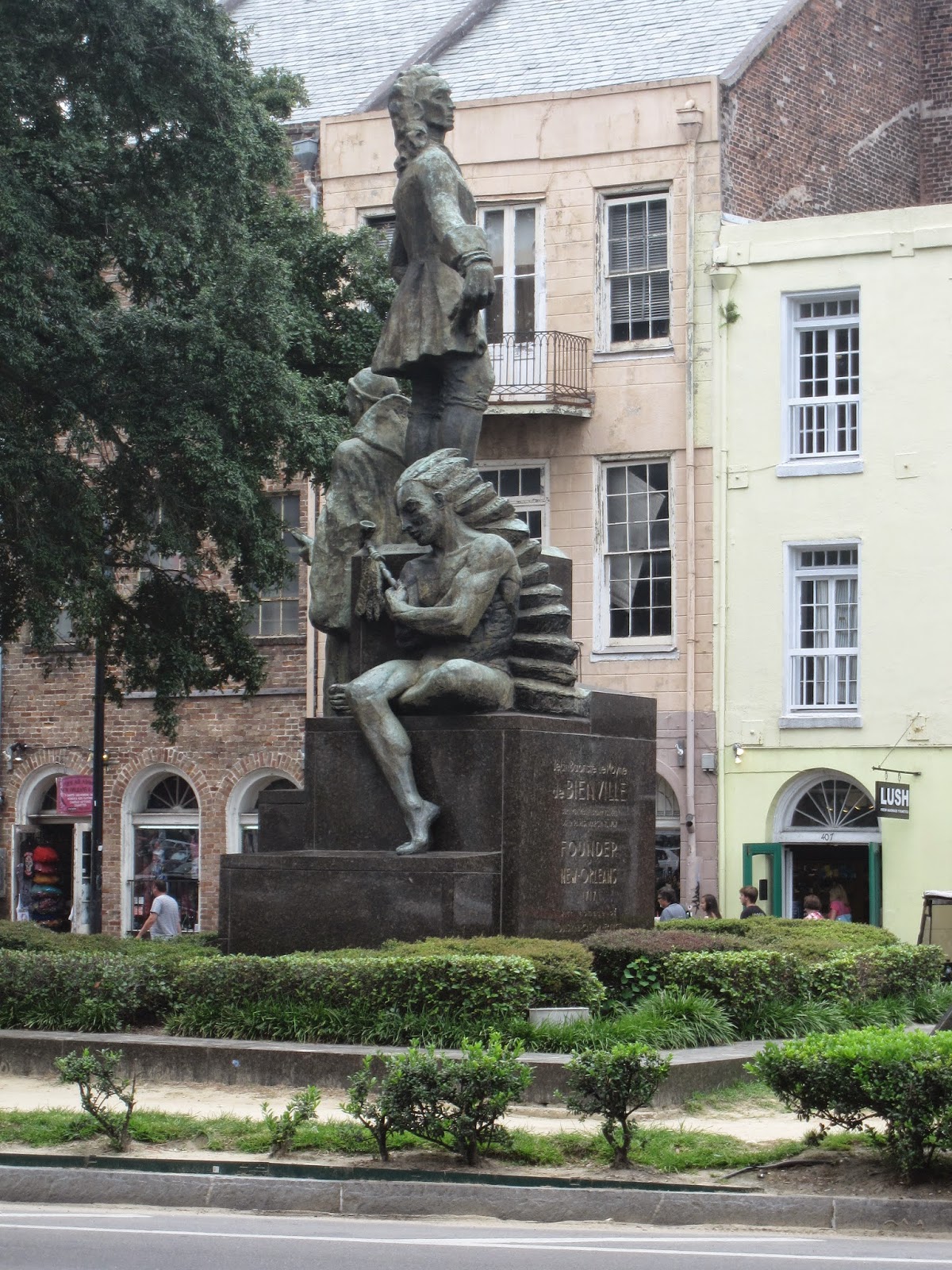 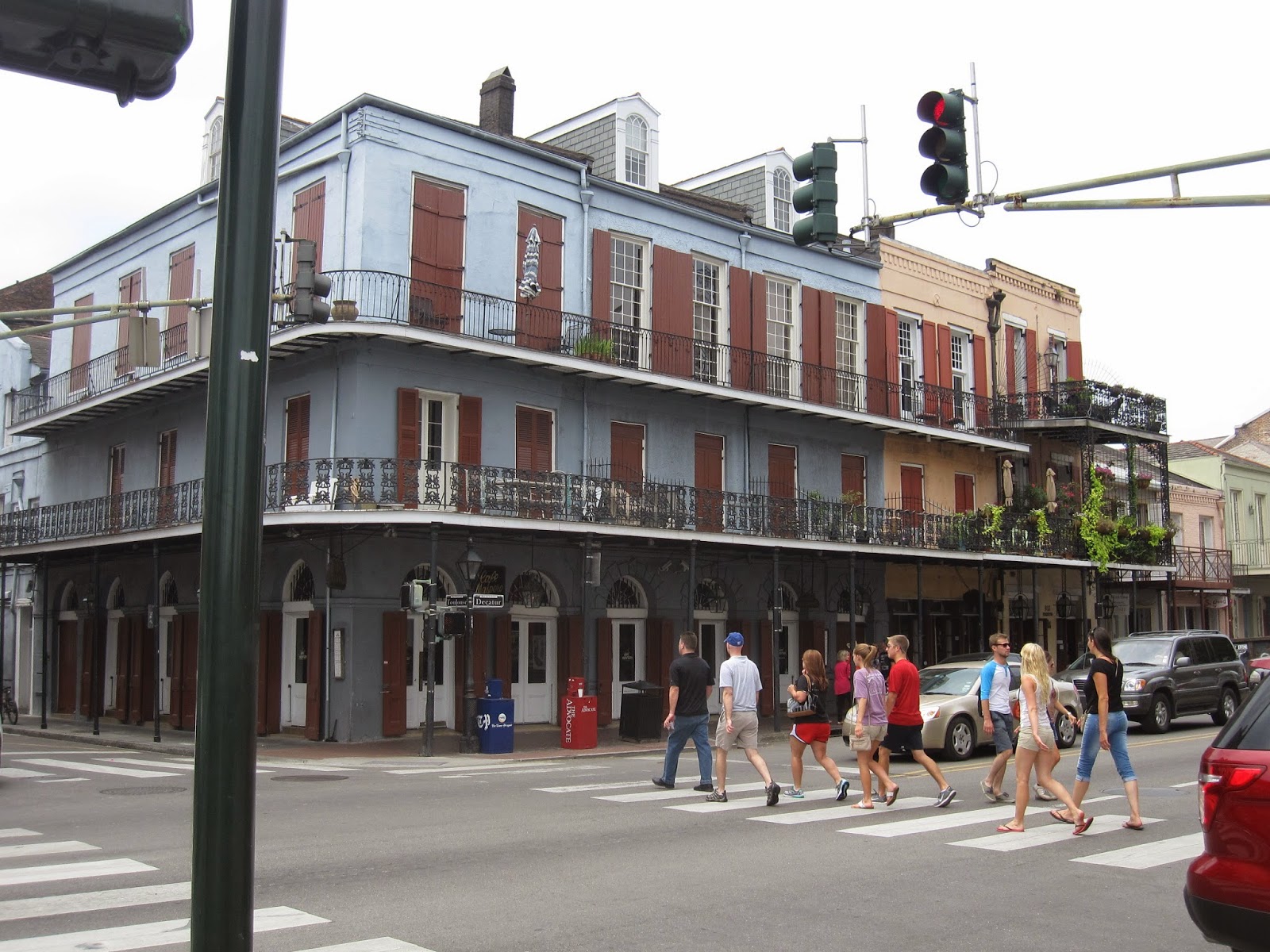 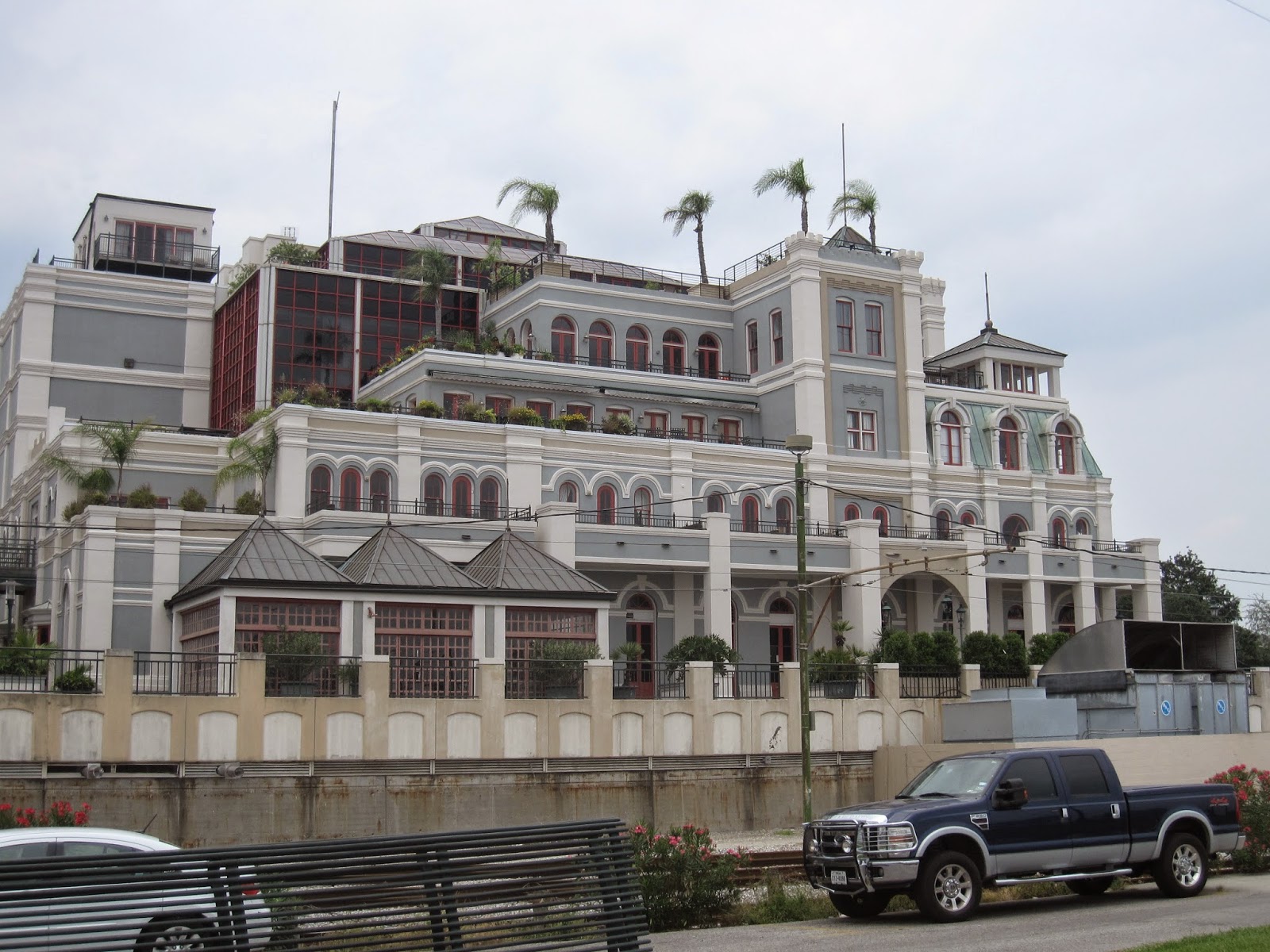 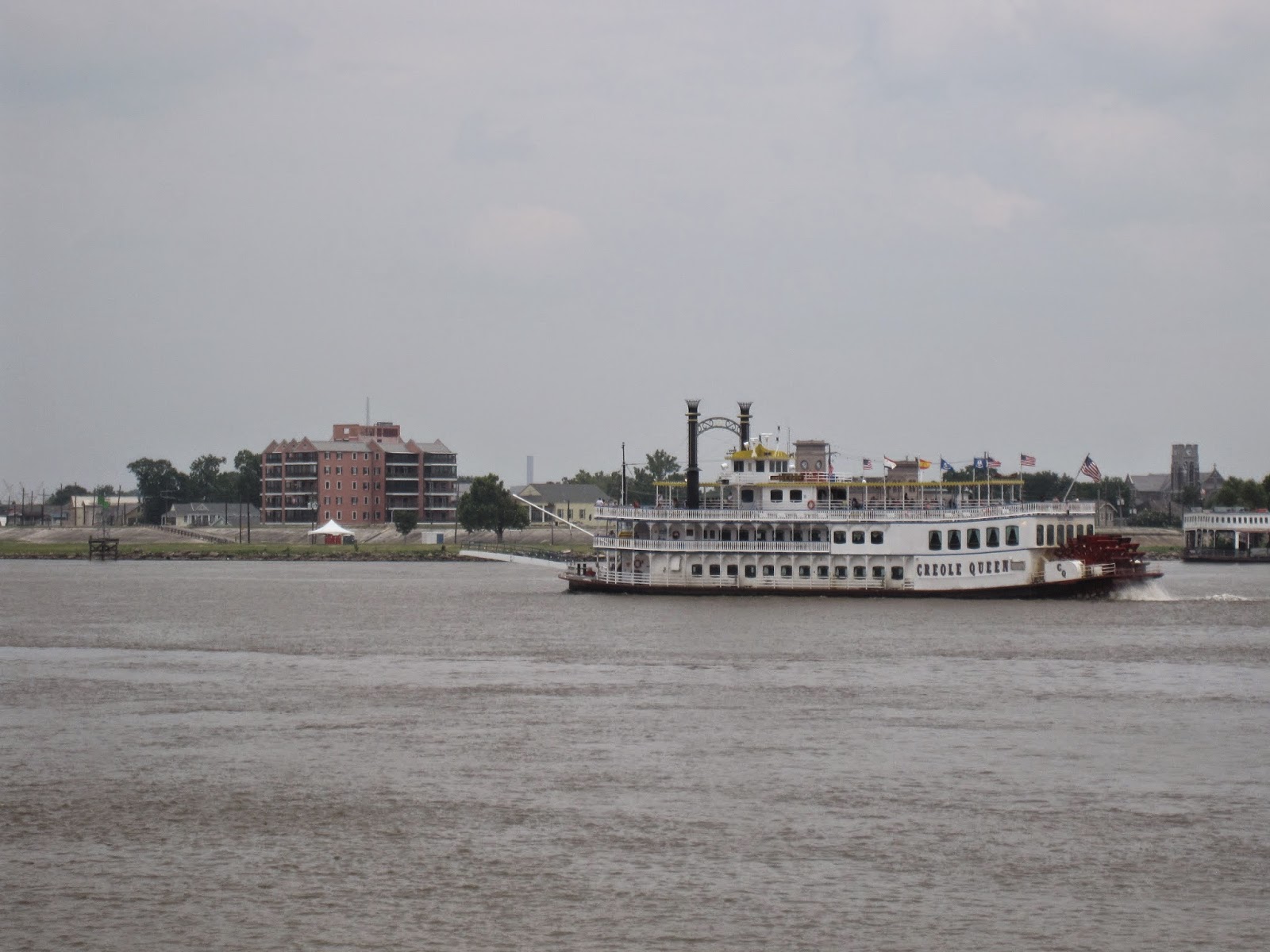 We spent about 5 hours exploring the French Quarter. We made sure to climb up a levy to see the Mississippi and some boats. Then we were off to Cafe du Monde for beignets. Apparently the coffee with chicory is amazing as well, but just smelling coffee makes me sick and it was waaaay too hot and sticky for any kind of warm drink anyway. I opted for fresh-squeezed orange juice instead. One order of beignets is 3 beignets. There were four of us and we certainly didn't all need 3 beignets, so we shared 2 plates between us. They were delicious and I certainly could have eaten 3, but I think my body would've hated me. 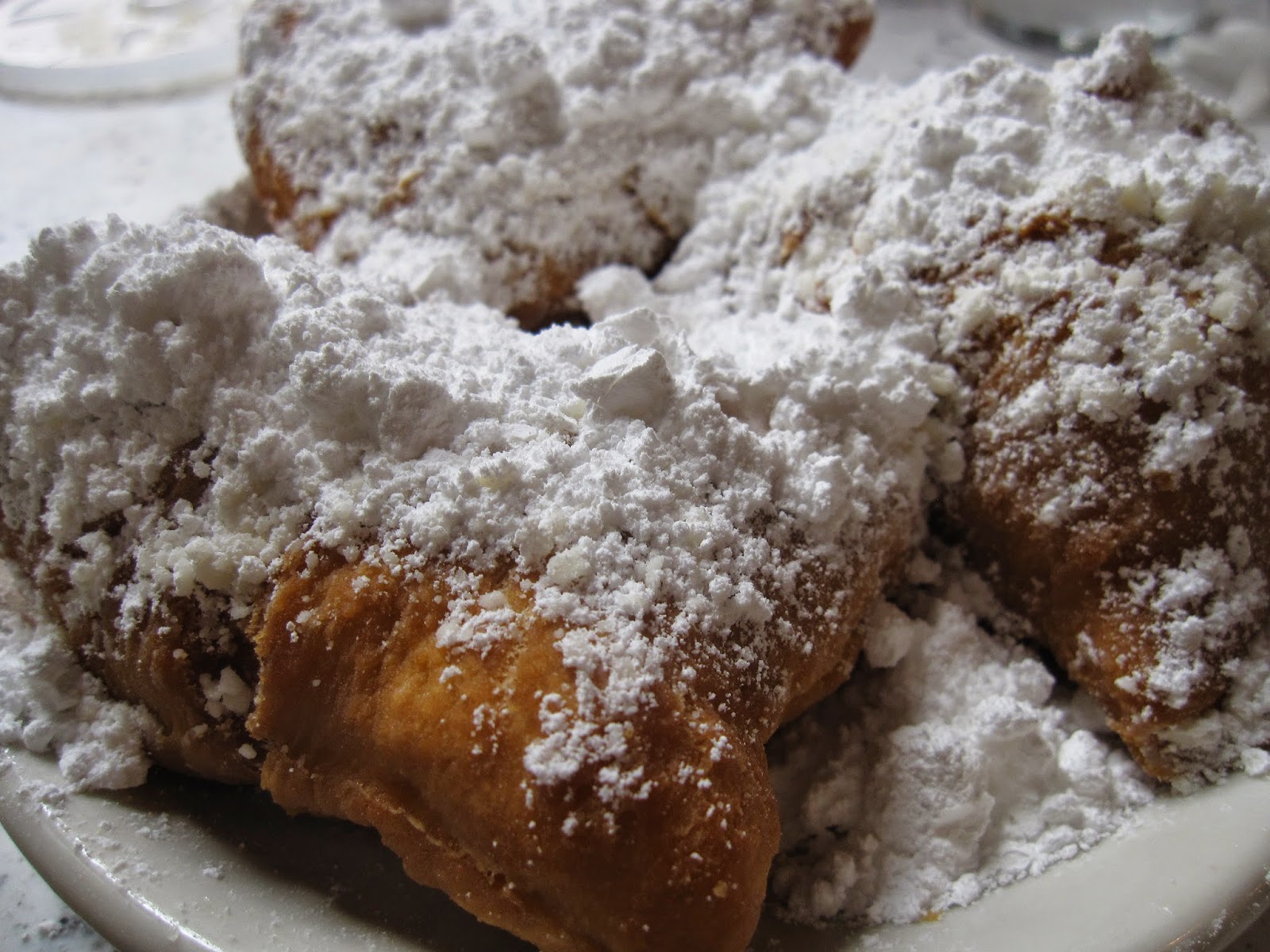 After our beignets it was off to the French Market, with lots of stops for pictures along the way. Many beautiful old buildings with wrought iron everywhere. At one point there was a kid with a sousaphone walking behind us. He eventually met up with a couple drummers and trombonists and a sax player and they wandered from street to street (we kept running across them) playing. We also happened to be there the weekend of the Satchmo Festival, so there were several events occurring for that. We wandered the whole market, I found a book to buy for the boys, The Beignet That Almost Got Away, and then we headed for Bourbon Street. 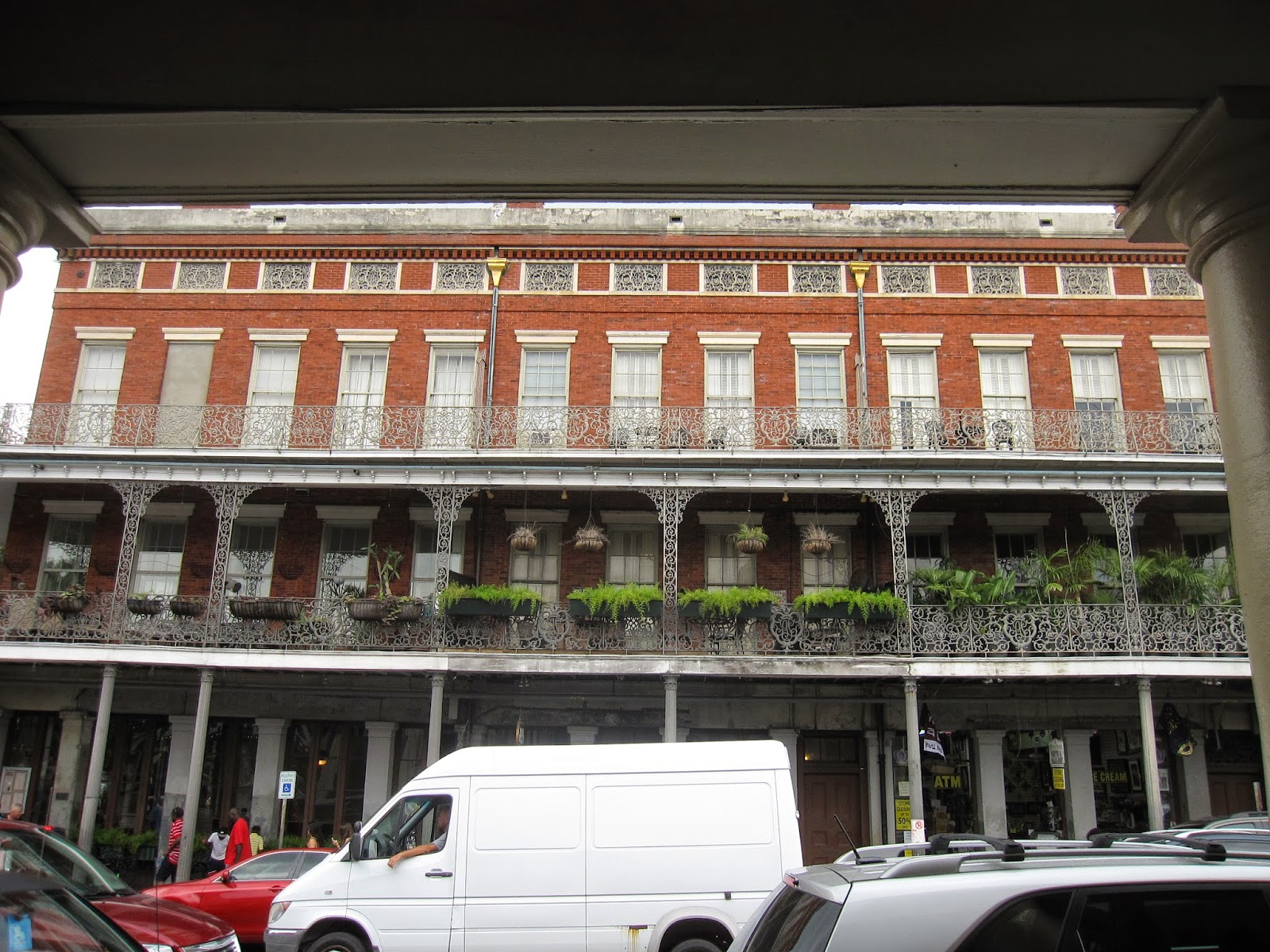 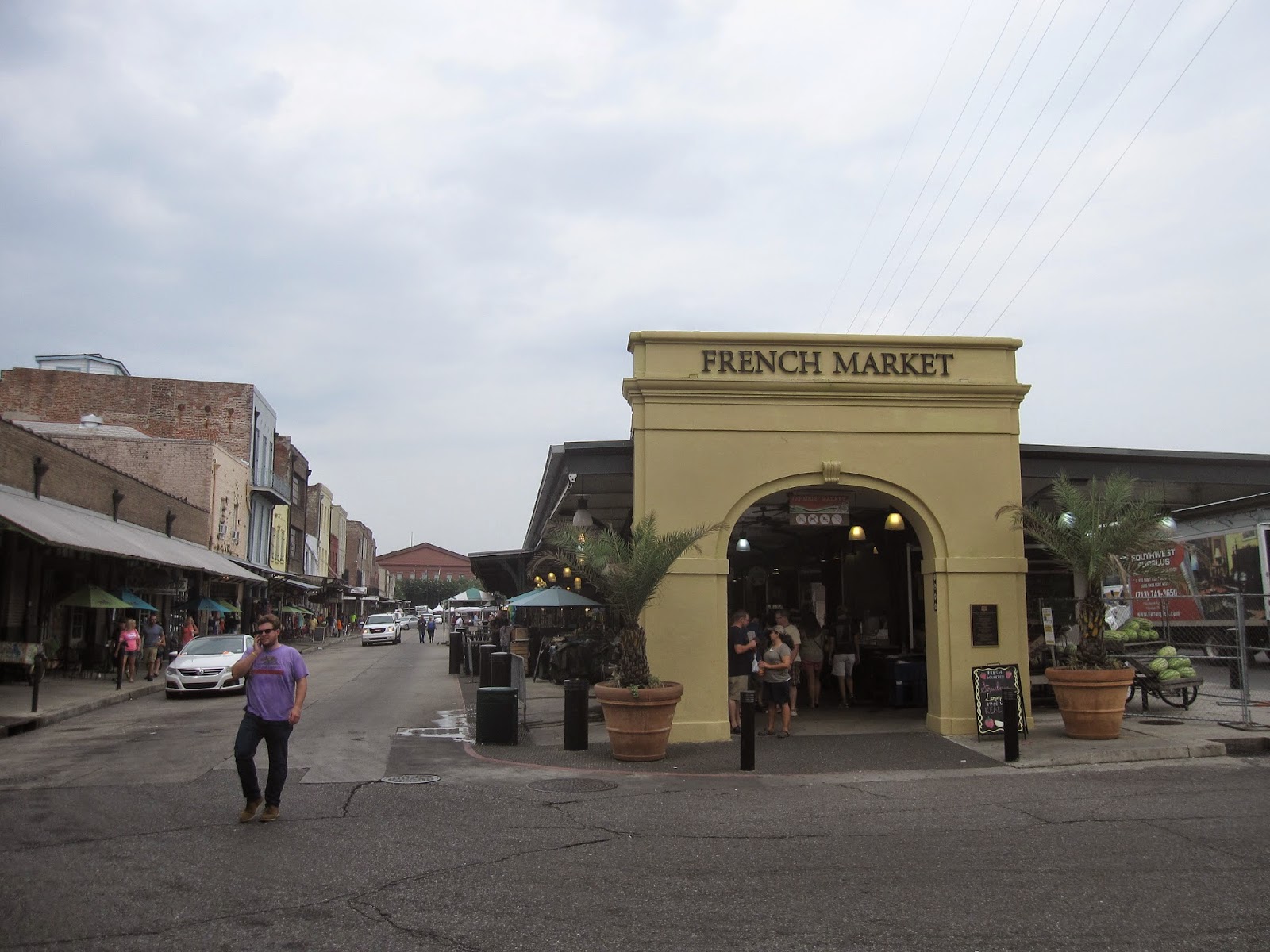 One end of Bourbon Street is primarily residential - though as cute as the houses are, I'm positive I wouldn't want to live there. Too much noise, too much crime, and I'd bet that the insanity from the other end of Bourbon St. occasionally bleeds down into the residential end. We slowly worked our way down to the more crowded end of the street.

While interesting to walk down in late afternoon, this is not the kind of place I'd want to be in the evening, especially on a weekend. We were there Friday around 4. Most people were still sober, though you could tell some were definitely there to party and were likely planning on getting plastered. There were several strip clubs with employees standing at the doors. Loud music from the night clubs (not jazz, unfortunately) and lots and lots of people already. There are a couple of swanky looking hotels in the midst of all this, and it was usually at those corners that the cop cars were lined up, ready to go should any trouble break out that evening. Maybe it isn't as bad as I was getting the impression it would be, but that kind of environment with tons of people just isn't my thing. Interesting to see once, but not the kind of place I go for fun.

We were all pretty tired out by this point and totally missed the biggest reason we were walking down this street - Preservation Hall. It's off of Bourbon Street, in the middle of a block, and in our exhaustion we failed to look down all the side streets. After making it down Bourbon St, we headed back to the car and drove back into the insanity in order to find Preservation Hall. There were more cops on hand by this time (no trouble yet, though). I guess I could see myself heading back there to attend a show at Preservation Hall, but I'd probably opt for middle of the week in the hopes of the area being less crowded/noisy/generally insane. Once we found the hall we headed out of the French Quarter. We made a brief stop at Armstrong Park and then ended up in the Garden District (it looks like all the wealthy people live here) for dinner and then headed back to Baton Rouge, hoping to make it in time for the evening chamber music concert.


On our way out of New Orleans we saw this on the side of a hotel and had snap a picture:


We made it to the concert just in time and got to enjoy some more beautiful playing. They were all wonderful performances, but I especially enjoyed Jon Manasse's performance of Crusell. Even more impressive than the clarinetists was the string quartet. They accompanied pretty much everyone who was playing a quintet or anything needing strings throughout the conference. So they accompanied everyone at this concert, our director when he played Tuthill, Sean Osborne for the Mozart, and several others. Basically, they learned a lot of music, rehearsed it all (one one-hour rehearsal each) with the clarinetists and performed it all superbly. But this concert was particularly taxing. It started at 8pm and finished around 11:30. You could tell they were all exhausted by the time they made it to the last piece (the Mozart), but they still performed beautifully. I could barely keep my eyes open for the Mozart after our long day in New Orleans and crashed into bed once back at the hotel, after talking with Ryan a bit and getting my bag packed.
Posted by Erin at 2:30 PM