Ryan turned thirty-nine this week. In between following the protests and trying to have some conversations with our kids (more in-depth with Gareth, obviously) about what's going on and why, we baked and celebrated. We started off the weekend by using up our leftover egg whites to try out macarons. I warned everyone that they sounded tricky and that they were unlikely to turn out perfectly on our first try.

We got better at piping as we went along. But it's a good thing I set expectations low, because we clearly didn't deflate the batter quite enough/it was undermixed. Some of them ended up overbaked slightly, others slightly underbaked (they were all in the oven on the convection setting together, so it's a bit odd), and apparently we didn't knock out any air bubbles sufficiently since some of them had cracks. They still tasted good at any rate. 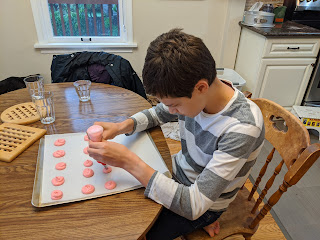 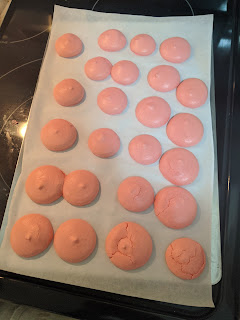 The next day I made up the chocolate cheesecake for Ryan's birthday. I was nervous about it since I was increasing the recipe to adapt it from a 9" to a 10" pan. It seemed to go well initially, but I think I must've over-mixed it a bit and maybe overcooked it a tad as well, since it ended up with huge crack. Again, it tasted delicous - rich and fudgy and likely impossible for just the four of us to make it through. 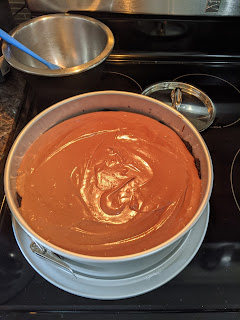 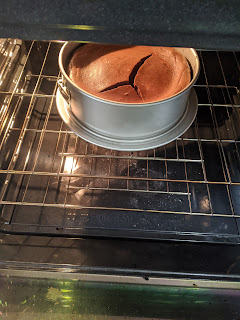 Ryan's birthday gift has been sitting in the living room for a few days, and was labelled on the box with what it was, so no surprises here. But he was still thrilled and declared that I think of the best gifts (made me laugh since I have a really hard time coming up with gift ideas for him). We've had a hard time finding pillows that are actually firm and don't flatten immediately, which really sucks when you're a side sleeper. So I got him (and me, because it saved some money to buy 2) a buckwheat pillow to try out, after looking into them and finding lots of rave reviews. We let Gareth try it out a bit and now he's jealous and wants one as well. 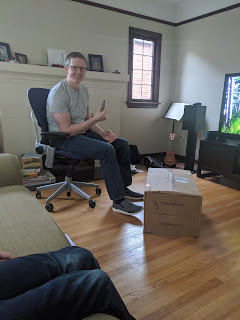 In non-birthday news, the cilantro seeds I planted in the railing planter are coming up! It's a self-watering planter with no real drainage, and we've had quite a lot of rain recently (including a thunderstorm, yay!), so I was starting to worry that they'd gotten too much water and not enough sun/warmth and were just being drowned. We'll see if I get to harvest any before winter comes. 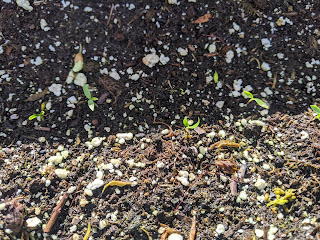 I had to look up buckwheat pillows . . . and now I kinda want one! You'll have to tell me what you think of them.

Two days in: We're liking them so far! A bit of an adjustment - they're louder than a usual pillow, but you get used to that quickly and they're not loud enough to be an issue. And just figuring out how to adjust the hulls to what works for you. But loving the support they provide. They're kinda heavy, which is a bonus in that my pillow doesn't shift around as much during the night (we don't have a backboard and I hated that my pillows would always shift toward falling off the back of the bed). Looks like there are a few different brands out there - we went with Hullo; it's what I came across first and my sister has one as well.