I was supposed to go on a bike ride this morning, but woke up yesterday congested. Felt well most of the day, so was hoping it was just allergies, but woke up this morning feeling worse and decided it was best all around if I stayed home today. Disappointing, but hopefully I'll be better by next weekend and can get out then.

Our plants are sprouting more, though only the cilantro seems to have come up in the railing planter. And the left side of the raised bed is looking much less productive than the right side. No idea why. But what is coming up seems to be coming along nicely. 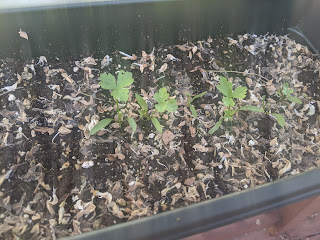 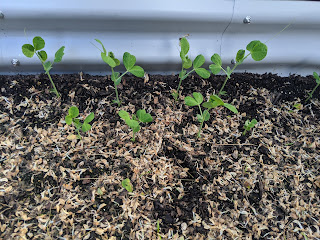 Ryan and I have embarked on a garage cleanout/reorganization project. We're trying to tackle a bit at a time, otherwise it'll be overwhelming. Yesterday we spent an hour or so and got our food shelf better organized. Ryan cleared up some cobwebs and did a bunch of shrub trimming outside so we could get in and out of the garage easier. Today we got a tool chest. Home Depot was disappointingly crowded, but once we found what we needed, we were able to get out quickly. We got it put together and put all the tools that have been sprawling over the garage floor for the past few years put away in it. 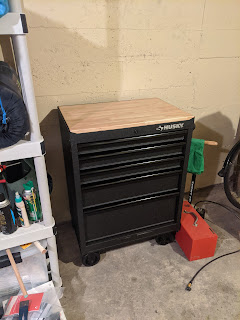 We still have a lot of work to do and a lot to get rid of. Planning to try and figure out some wall storage, a better way to store the bikes, and likely some more shelf storage. Hopefully in a few weeks we'll have made some good progress; it's been a project we've known needed to happen for a while, so it feels good to finally get around to it.

No baking this weekend, but we plan to be back at it next weekend - if my work and biking plans allow.
Posted by Erin at 6:58 PM