We didn't do nearly as much baking last weekend, partly due to the fact that we still had cheesecake left from Ryan's birthday. But we did try out another Julia Child recipe: Potato Cheese Sticks. Basically just riced potato mixed with egg, flour, cheese, butter, and seasonings. 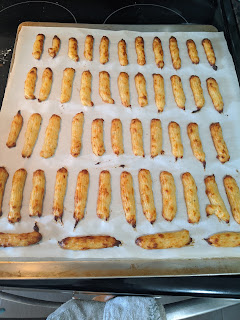 The mixture got easier to pipe as it cooled a bit, simply because it held its shape better. The first tray kinda flattened out a bit, while the second tray (above) held their shape better. I was shocked that Mal actually liked them, considering he hates potatoes and cheese. The texture is a bit like a french fry - still soft in the center, but a little crunch on the outside. I was worried they'd taste terrible as they cooled, but they're actually fine.

Now that things are opening up a bit, we were finally able to get our broken fence replaced. We'd realized that each section was going to fall apart one by one, so we may as well replace the whole thing since the people we bought the house from clearly didn't get it built correctly. The team came early in the week to remove the old fence and to pour concrete for new posts, then came a few days later to put the new fence up. 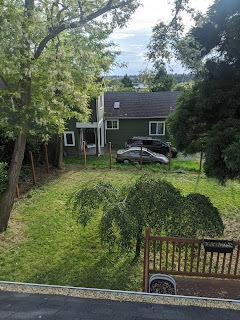 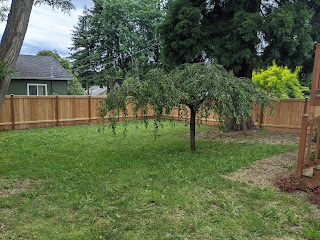 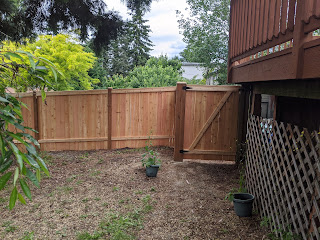 It feels good to have got one repair/improvement project done. This weekend's baking is a butterflake herb loaf.


All of us worked to cut out the circles, spread with filling, fold in half, and place in the loaf pan. Our pan was a little bigger than called for, so instead of two loaves we made one. 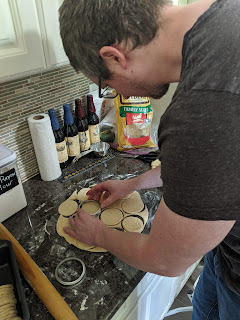 All done! Some crackage along the side, which I'm sure means we did something wrong. But tastes great! We'll definitely be making this one again. 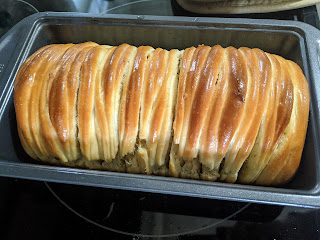 That bread looks amazing! And I'm so glad you got a new fence up. We need to do something about ours...