Our friend, Mrs. Redpath, was having a plane she worked on tested down at Boeing Field yesterday. Mr. Redpath invited us along for a ride down to a park nearby where you get a great view of the planes. I rode the single and he hauled one of his kids and Gareth and Malcolm on the tandem-tagalong-trailer. Another of his kids joined us on a single, as well as a friend of his from the neighborhood.

It's always startling to me how easy rides feel when I'm not pulling a trailer. I've been having some neck/shoulder muscle pain for a week now, so was a bit worried about how I'd fare, especially since I opted to not take the drowsiness-causing muscle relaxants I got at the urgent care over the weekend. Oddly enough, I felt more comfortable on the bike ride than I have through the past week.

Here's Mr. Redpath's setup. He tried to switch Gareth to my bike at one of our pit stops, but despite several attempts I couldn't get the hang of the tag along wobbling behind me. Gareth and I ended up falling - on the grass thankfully - while attempting to ride. I'm hoping to get the tag along balance down at some point so I could put Mal on it. But we opted to keep Gareth with the tandem for this ride, meaning Mr. Redpath had to work much harder than the rest of us throughout the ride. 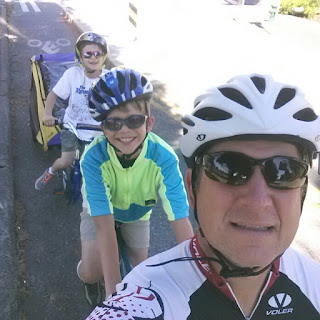 We stopped along the Duwamish River Trail for a group photo. 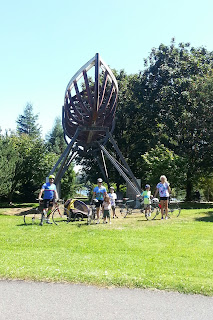 And another one once we reached our destination. 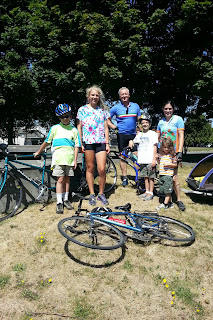 Rainier was out and we got several lovely views of it through our ride, which took us along the Elliot Bay Trail and the Duwamish River Trail. I took a picture once we arrived at our destination, Ruby Chow Park. 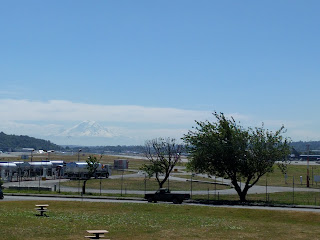 The park is named after Ruby Chow, who was a well-known Chinese-American restaurant owner and the first Asian American elected to the King County Council.

We could see the planes well and Mal was very excited every time a small plane would take off or land. Mrs. Redpath's plane was just doing ground testing. Her plane is the furthest away of the grey planes (3rd from right). 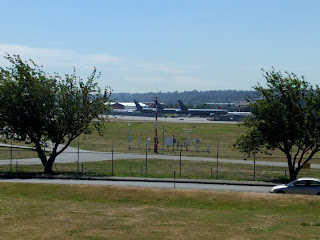 Then we grabbed some lunch at a nearby deli before heading back home. It was in the 80s, so we went through lots of water. 38 miles round trip. We got back to Redpaths' and Mal informed me that he'd worked very hard during the ride and that he'd had a great ride.
Posted by Erin at 12:33 PM