Planning a couple playdates for right after family left has helped to distract the kids from missing grandparents. The day Ryan's family left the boys spent a lot of time playing with Legos. I built Mal's spaceship, but Gareth built his own. 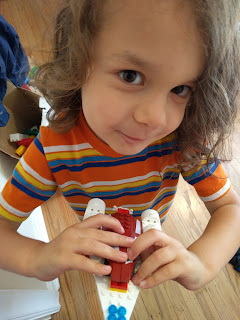 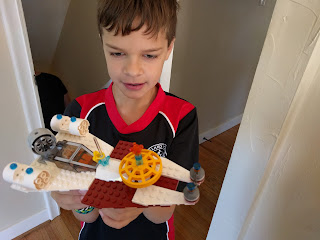 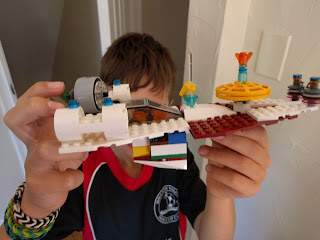 In the afternoon we headed to Target and grabbed some baskets for their shelves. Then went to a local park to meet up with one of Gareth's best friends from his new school - Gareth had already gotten annoyed with me that we hadn't followed through on our promise of getting them together in the week or two after school got out. As Gareth expected, she was surprised to see his haircut and his braces. The three kids had a great time playing at the park, despite the broken zip line. Last summer the zip line was broken as well, so that was very disappointing to discover.

The next day we met up with some friends from the old neigborhood and went bowling. I helped Mal a bit, but my help isn't really very helpful. Thankfully 4 year olds are just excited to knock over any pins at all. Gareth got a little frustrated that the ball would sometimes change direction part way down the lane. Gareth won the first game, but Mal won the second. Mal even managed to get a strike in the first game. 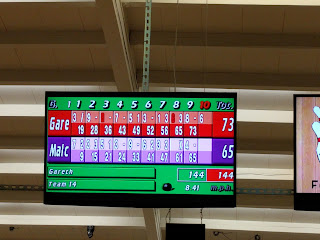 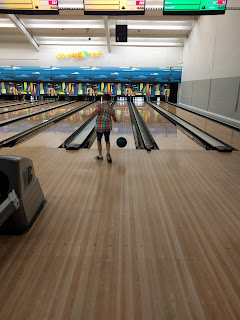 The bowling alley has a thing where kids can bowl two games for free during the spring and summer. I signed them up for that, so all we had to do was pay for their shoes. Kind of cool. This bowling alley was less sketchy seeming than many I've been to (not that I've been to all that many), so that was nice as well. And it was a fun way for the boys to spend the afternoon.
Posted by Erin at 6:55 PM