We celebrated the 4th by heading with Daniel to hang out with some local friends. Mr. Redpath had just returned late the night before from driving his daughter to the Olympic track and field trials in Eugene, OR, where one of her track coaches was competing in the long jump (he didn't qualify). She needed some shots for a film she's making. Anyway, we put together shishkabobs and a spinach salad and a watermelon and headed over in the afternoon. Redpaths made a lime sherbet punch, which Mal quickly became enamored with. That and the "salambe", which he made sure to tell everyone else to eat as they arrived.

Mal eventually left the food behind for a bit to play with bubbles (and we managed to tear the older kids away from video games for a bit with that as well). 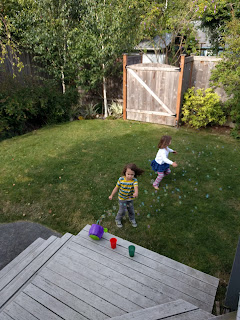 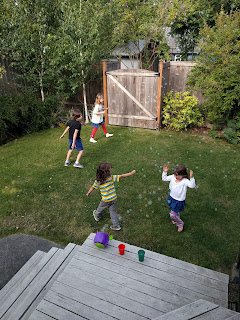 It was in the 60s and overcast, which is more "typical" Seattle, but which we hadn't experienced on the 4th of July since 2010. We still sat outside in the evening to catch some glimpses of the fireworks. A very enjoyable evening with friends, though Mal struggled a bit with getting to bed once we got home. So tired and trying so hard not to be, but also extremely grumpy because he was so tired.

The kids slept in some this morning, but we still managed to get out the door in time to head to my appointment to get my second round of the TB test placed. I really know how to celebrate, don't I? Since we were back over in the old neighborhood again for that anyway, Mr. Redpath and I decided we'd throw Gareth on the tag along behind the tandem and put Mal in the trailer behind the tag along. Makes for a long bike, but it worked well. We were both able to get some errands run and get in a few miles.

At one point we ended up facing an extremely steep incline - at least a 20% grade. Partway up the hill we came across some guys driving a delivery van and they gave us shouts of approval. We all gave it our best, but did end up having to get off and walk the last quarter or so of the hill. Mr. Redpath has a heart rate monitor and he knows exactly what his acceptable limit is - once we hit that we stopped, which coincided well with when I was fairly certain I was going to keel over. Otherwise an uneventful ride. Gareth enjoyed it immensely and Mal was well-behaved.

We stopped at Redpaths for lunch, where Mr. Redpath spoiled the boys by making them octopus hot dogs and giving them blueberry ice cream. He even made faces on the octopuses. 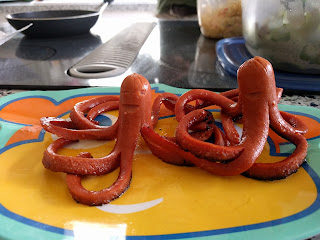 After that it's been a pretty calm day. Just hanging around the house, taking Gareth to jiu jitsu, watching shows with Ryan, all the usual things. Pretty good way to spend a birthday.
Posted by Erin at 10:44 PM